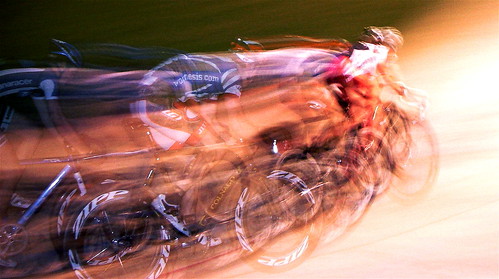 This year’s first Festival Of Speed was stunning. Saturday was stacked with races highlighting strengths and weaknesses across rider categories, disciplines and well, continents! Australian pro racer and Kazane rider Jeff “Hoppie” Hopkins, quite literally, left his competition in the dust… 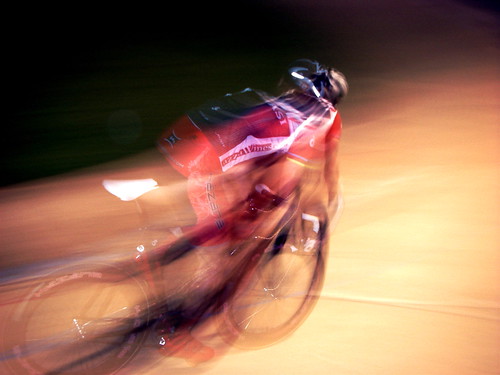 The blurred apparition above is all his opponents really ever saw of him as he earned 1st place overall by compiling a whopping 69 total points over the course of the day’s events. The full results for Saturday’s races can be found here. 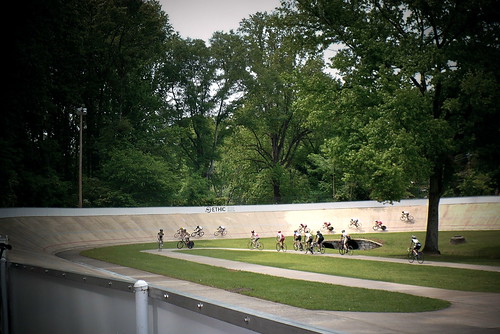 The image above, courtesy Carol and Matthew Cobb, is a serene view of where the the day’s only unfortunate hitch occurred. There was a brutal accident in turn four of the women’s points race. Quoted from Faster Mustache:

Between turns 3 and 4 on the steepest part of the velodrome, a rider from Asheville (Jeanne Hurtz) came down across the front wheel of local rider Amy Lang. Amy had another rider directly below her, ie to her left, so she knew she couldn’t avoid the situation and was gonna get hit and go down. If you scroll through the photos from CK you’ll see a post-accident photo of Amy’s wheel where there her spokes were cut and sections of up to 1+ inch are missing. This was just the beginning.

So the riders directly behind this chaos did what they could to avoid the crash and most escaped with just scraps, bumps, bruises and even ant bites after sliding down to the apron. In Jenny’s case she went high, which you are supposed to do, but had so much speed, 25+mph, and another rider in front of her also going high that she had a direct hit on the outside retaining wall. Apparently her right hand hit the railing first, then her face, then her sunglasses and then her helmet. Witnesses said once she hit the wall, she slid along it for about 5 feet and then slide down the concrete bank onto the apron.

Everybody, except the woman noted above could walk away from the accident, but Jenny was the only one with quite abit of blood from where her sunglasses broke and then dug into her face and a deep cut on her right hand. Thankfully it looked much worse than it was and the plastic surgeon that Crawford Long called in was able to sew up the muscles underneath the eye and then her skin in such a way so she’ll never have to go by the name Jenny “bar fight” Walsh.

The Asheville rider, Jeanne Hurtz, suffered a broken clavicle and is on the road to recovery with no permanently debilitating injuries. 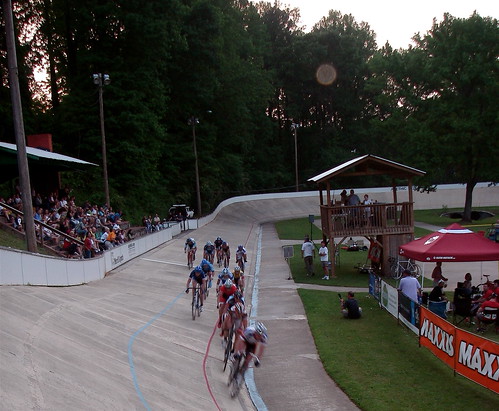 The rest of the day proceeded without bloodshed nor destruction. Although a shoulder to shoulder jockey to avoid removal whilst the amatuer men’s Miss’n’out race between No Brakes rider Jon Woodroof and EPTC rider, Jason Jones did have the crowd on edge!
Both the Keirin and the Madison races, pictured below courtesy Chris Kelly, were certainly intense closing races for a day packed with fierce one on one competition and riveting team strategies. 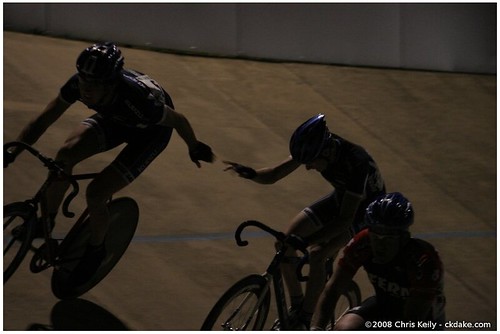 More photos can be found on Chris Kelly’s site and the Flickr.

~ Another post race report courtesy Sechs Mintuten Renner
~ Australian Cyclist Smasher Is “No Cyclist Hater”
~ The Atlanta Bicycling Campaign has organized the city’s first Bike Fest is tomorrow. This may hamper our hours that day but hopefully not! See you there if you are downtown!
~ Big thank you to John Paul for the shout out in Clickclique!
~ Got Some Swobo’s comin in soon!
~ We finally have our latest run of stickers with more on the way soon as well as new T’s!

See everyone at the shop, Bike Fest and the Track tomorrow!