Like last year the action was intense, the riders hailed from far & wide & my report on a tardy 7+ day delay!

Above, The Chaz using his head in a Keirin heat against Matt Baranoski. 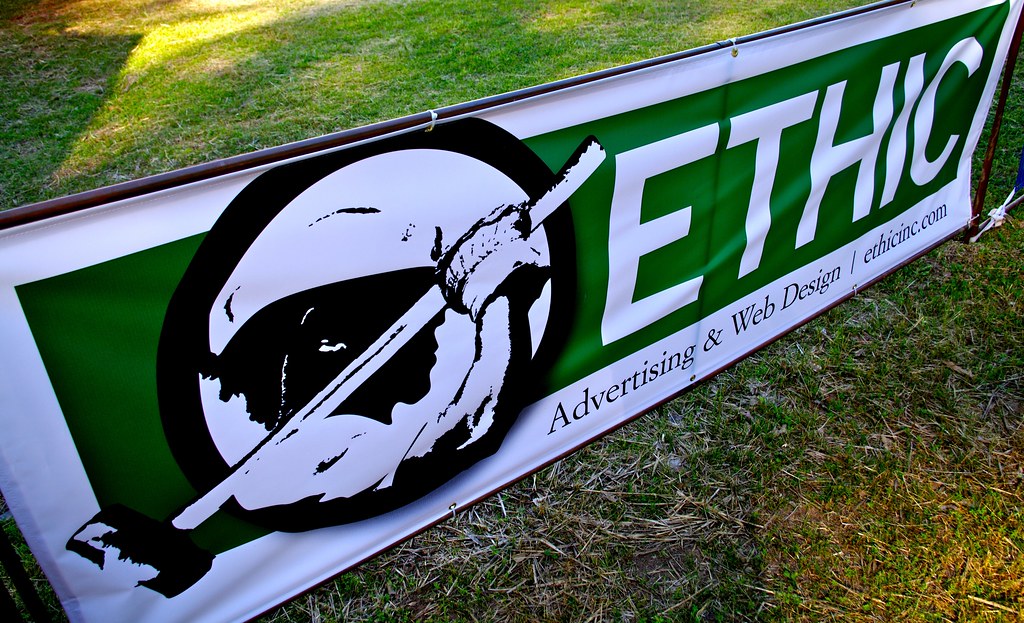 Another common thread with last year’s Keirin event was that it brought the crowds.

Its always great to see the track packed with spectators and its a sign of attendance for upcoming events! 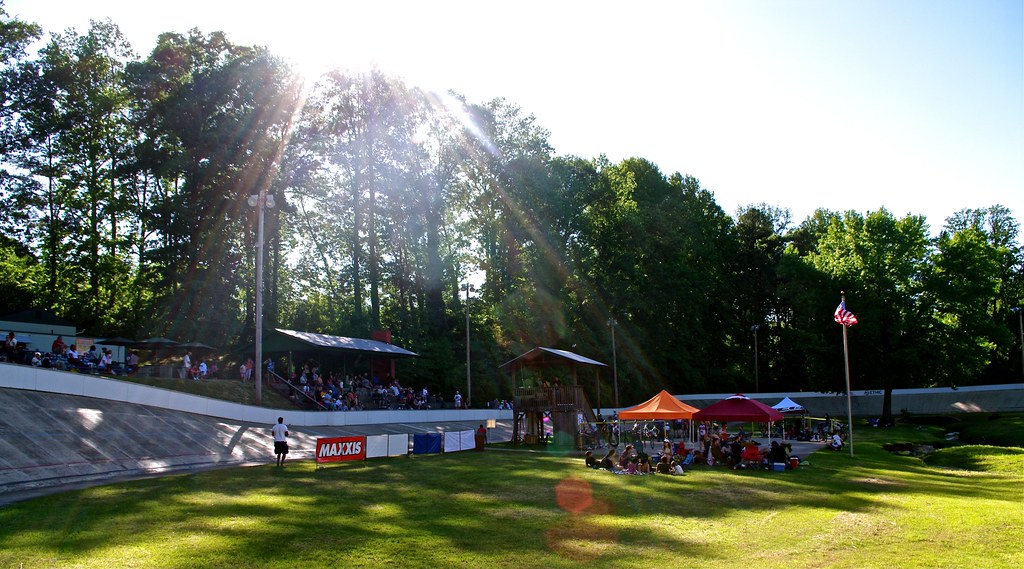 The day’s racing started early and the B field was packed.

There were several racers stepping out for their first festival.

One of which was Chris Orosco, pictured below leading out a points race lap. 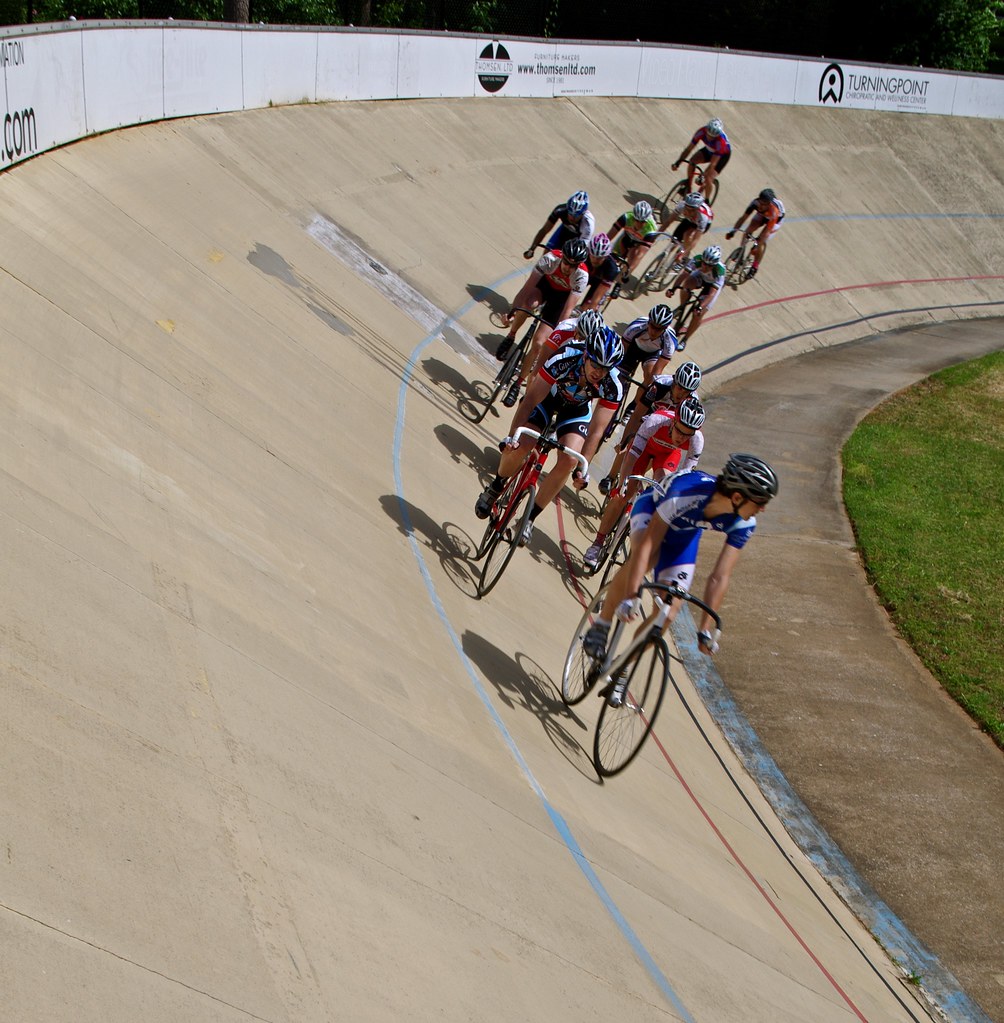 Throughout the day he earned two firsts and second which qualified him for first overall. Congrats man!

Below is a nice shot of Faster Mustache racer Jason Atwood.

Pictured below is Richie of Sfatto Clothing taking first in the Miss’n’Out & doing some product testing.

Keep up with Sfatto on Facebook. And look out for lots of rad thing coming from these guys this year! 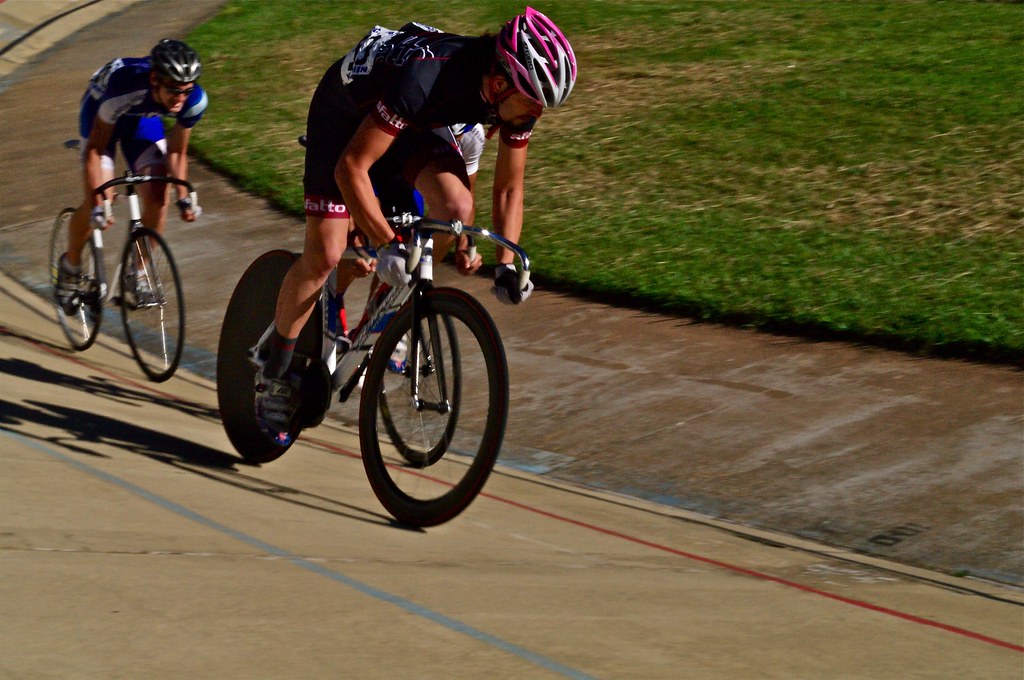 & Pete Antonvich (left) of the East Point Track Club. Both pictured below. 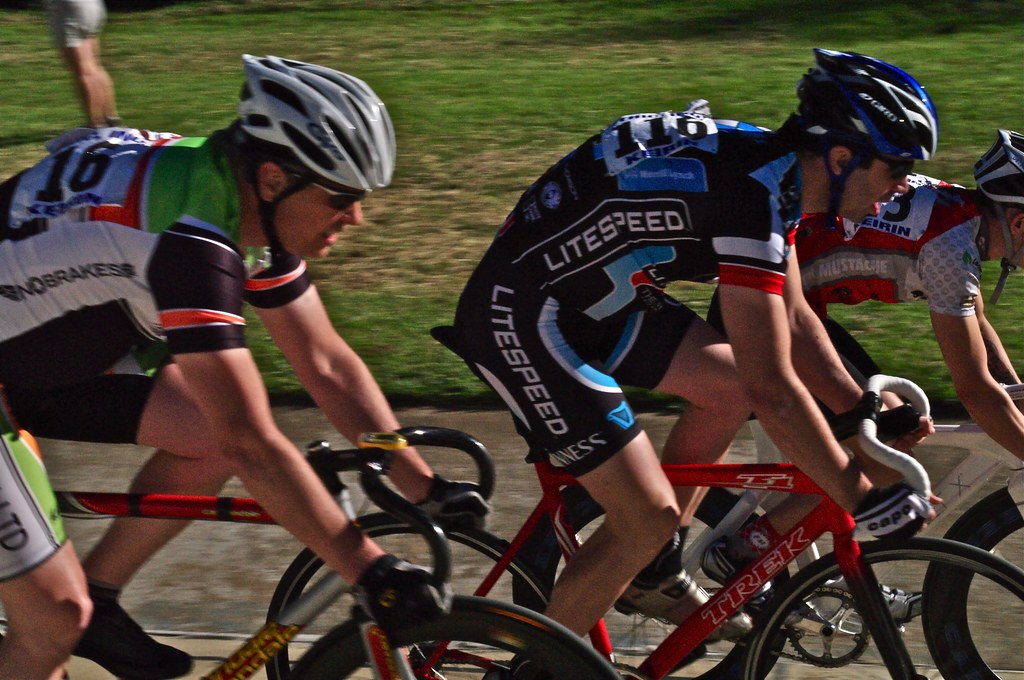 ever more impressive each year to their older peers on the infield.

The most recent Little League events were no different! 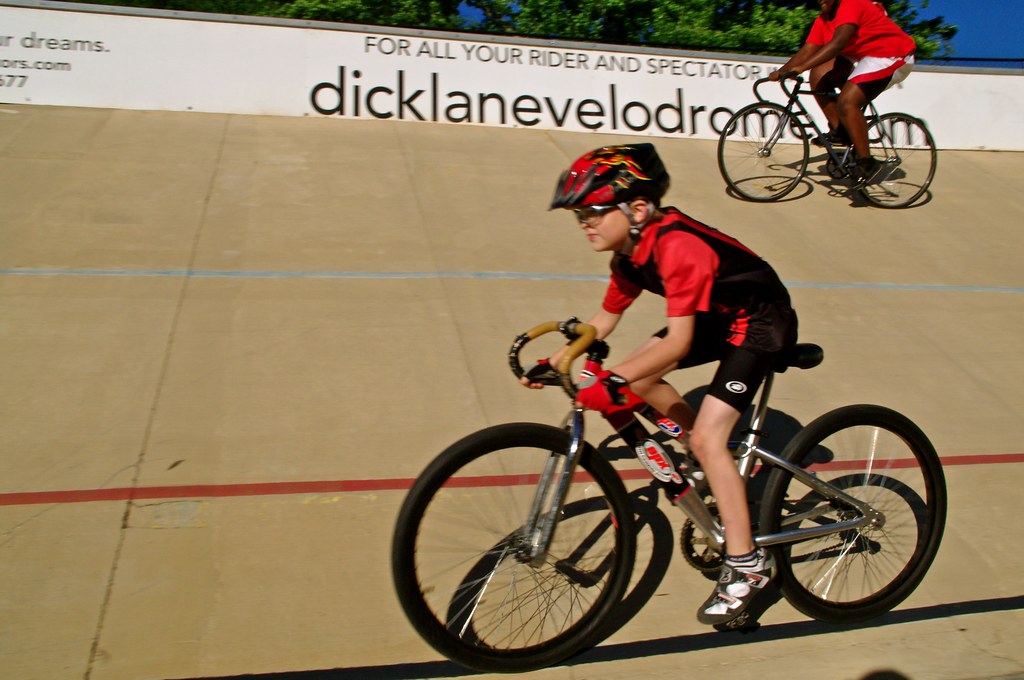 Below is Isabella Whitesides taking 2nd in the 3 lap Scratch. Her dad Wayne owns Ethic, Inc.

These young racers have their sights set high

taking titles here at the track and beyond! Congratulations to all Bicycle Little League racers! 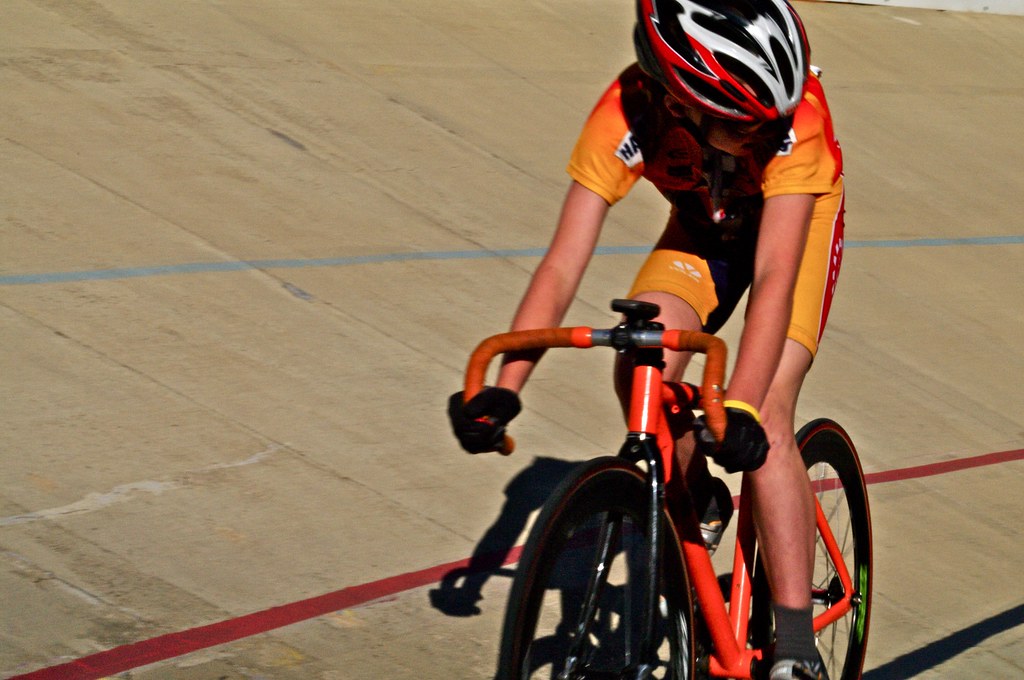 My day started with some nervous apprehension. This marked my first festival competing in the A’s.

Though I had several weeks of Wednesday night A racing under my belt,

I knew this would be alot harder and alot faster.

Warming up with legends like Kent Bostick was both intimidating and inspiring. (pictured right below)

Kent is a Masters athlete in cycling who is still going strong and winning championships in his early 50s,

A prime example of someone not letting age slow him down.  I know he smoked me at half his age! 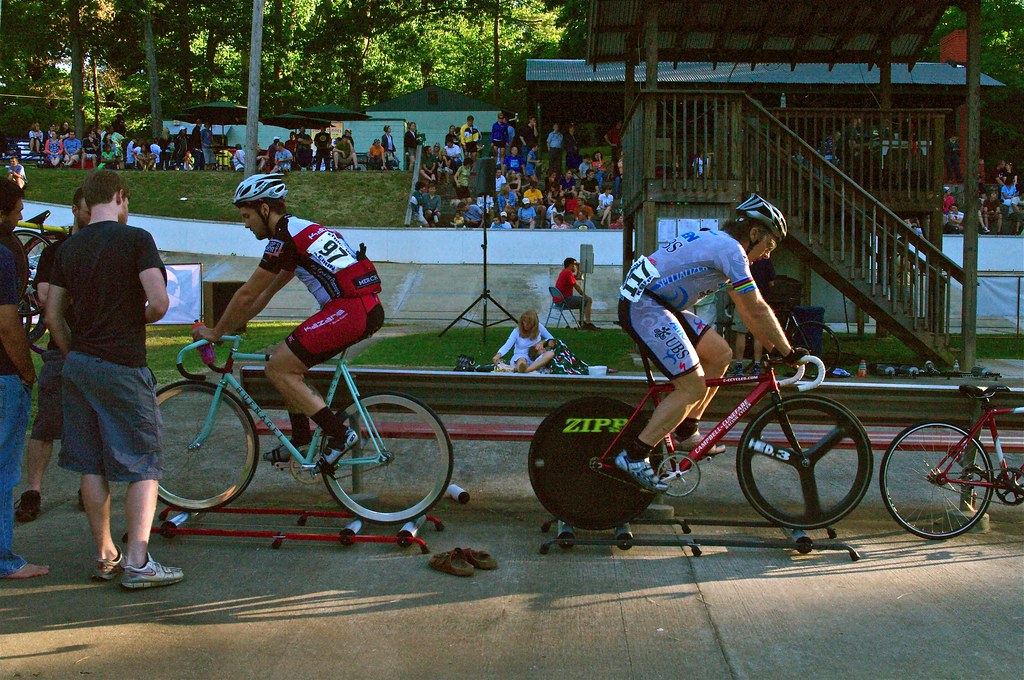 The shots above and below were taken by my teammate Stafford Brooke.

He managed to capture a moment in which I was not cracking under the crushing speed of these races.

I walked away with 8th overall and some points.  That is really all I could have hoped for but I aimed high!

Of course, I plan on improving my performance and, as always, have my work cut out for me. 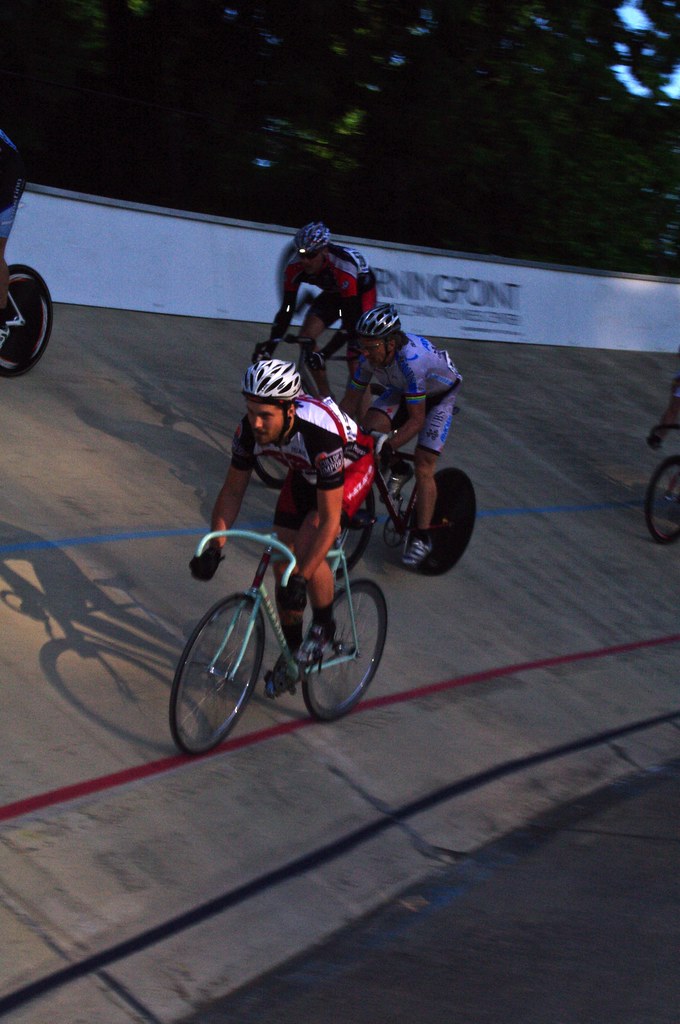 It was no surprise that Kent took first in the overall A Category Omnium.

Jason Sprouse of of the Asheville Mellowdrome took second.

Dan also competed in the Keirin main event too!

Below is another shot by Stafford of Kent Bostick at the finish line of one of our races. 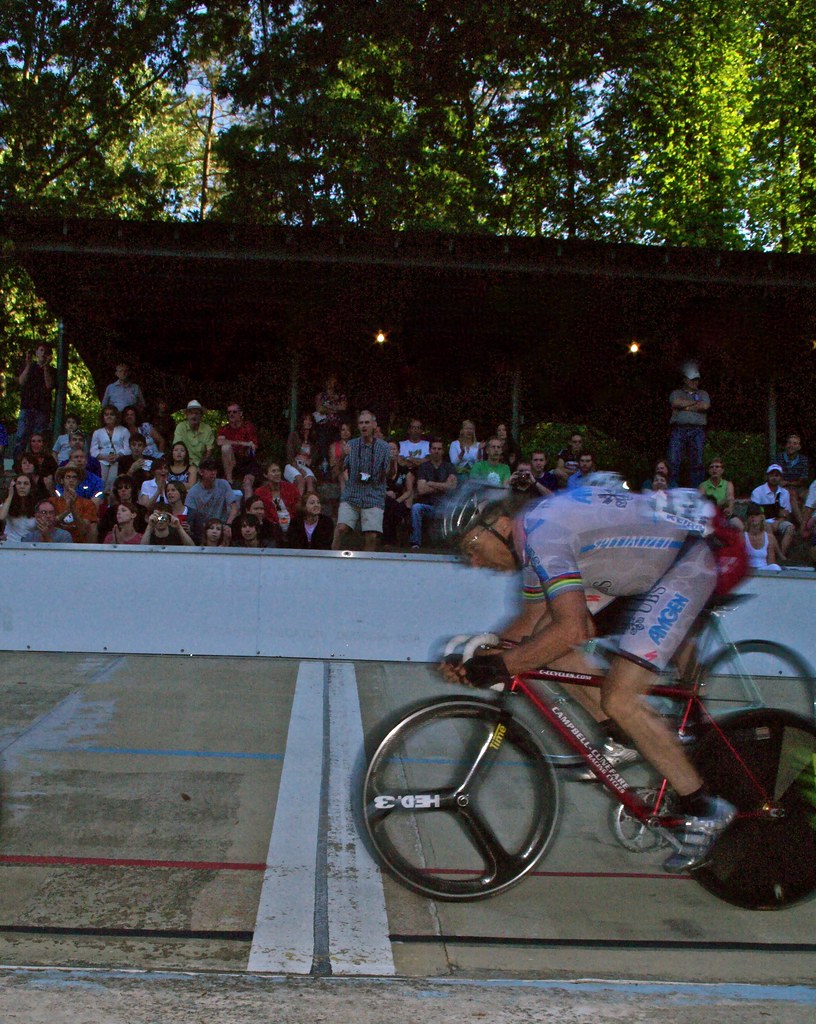 At 6pm after a brief intermission, Bill of Thomsen, Ltd. fired up the derny for the highly anticipated Keirin. 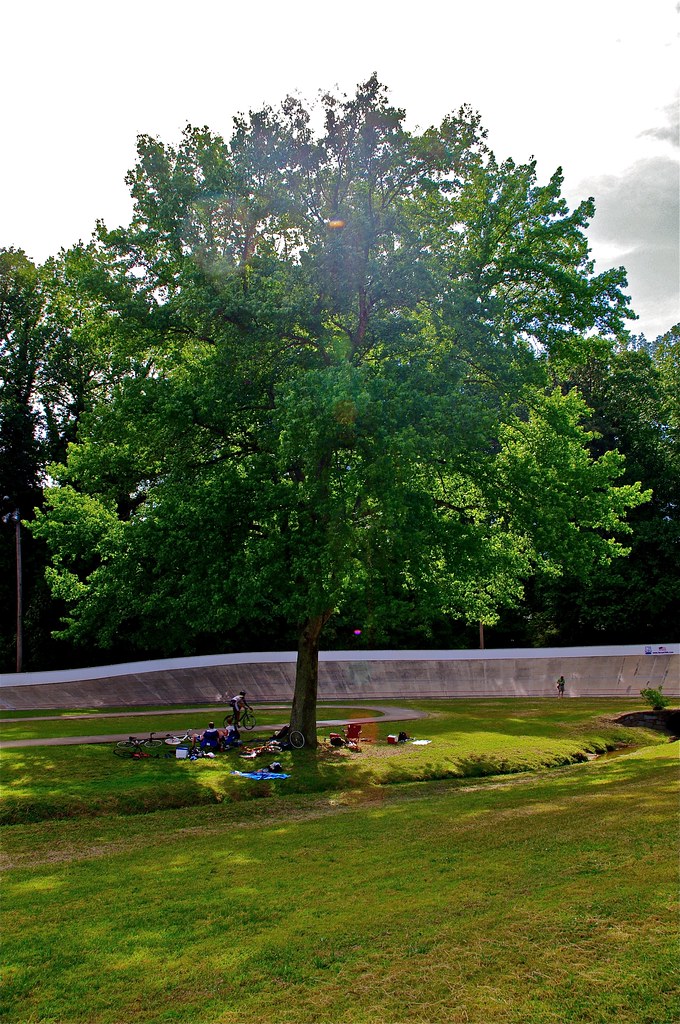 Below is the roster of racers who competed in 4 rounds, 2 heats each leading up the final sprint for glory. 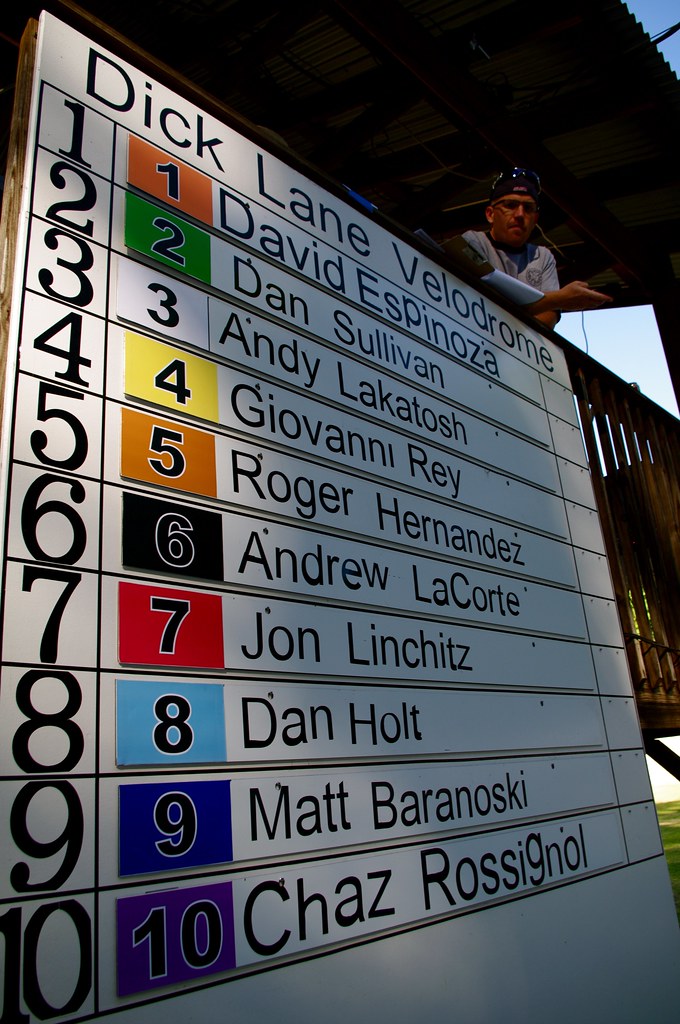 Scott Patton of Fixed Gear Fever did a phenomenal job announcing all day and introduced each Keirin rider.

Below is T-Town native, Andy Lakatosh who, the night before, tied with Espinoza for the 11.03 200m record. 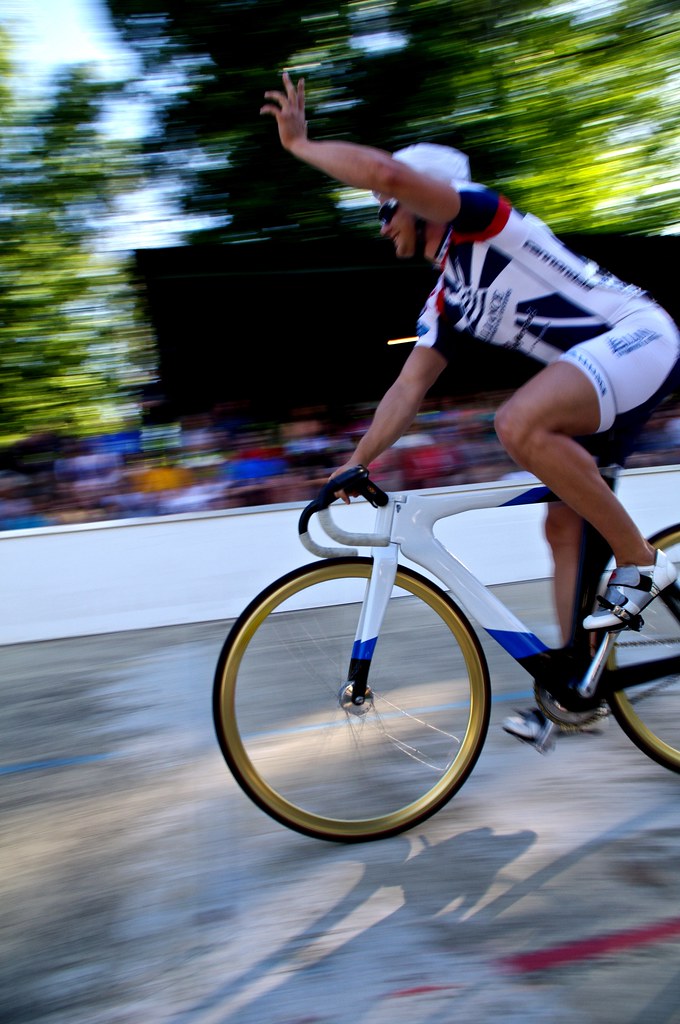 Roger “Spiderman”Hernandez of  Nitroshot, was really hamming it up for the crowd and greeting fans. 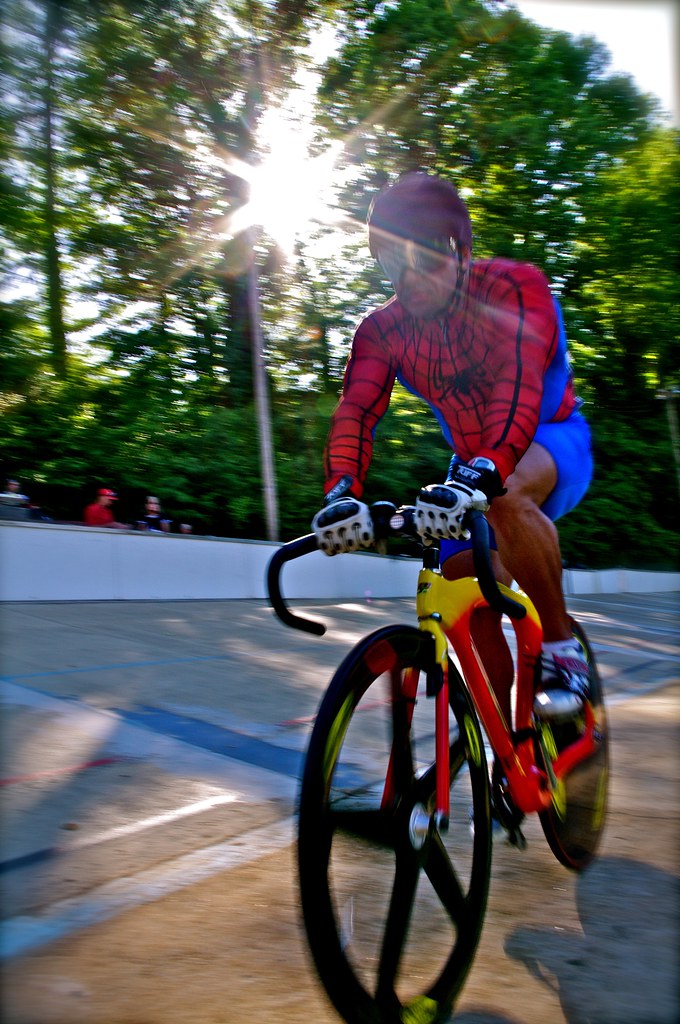 who even had some fans swooning at his suave style and performance both Friday & Saturday. 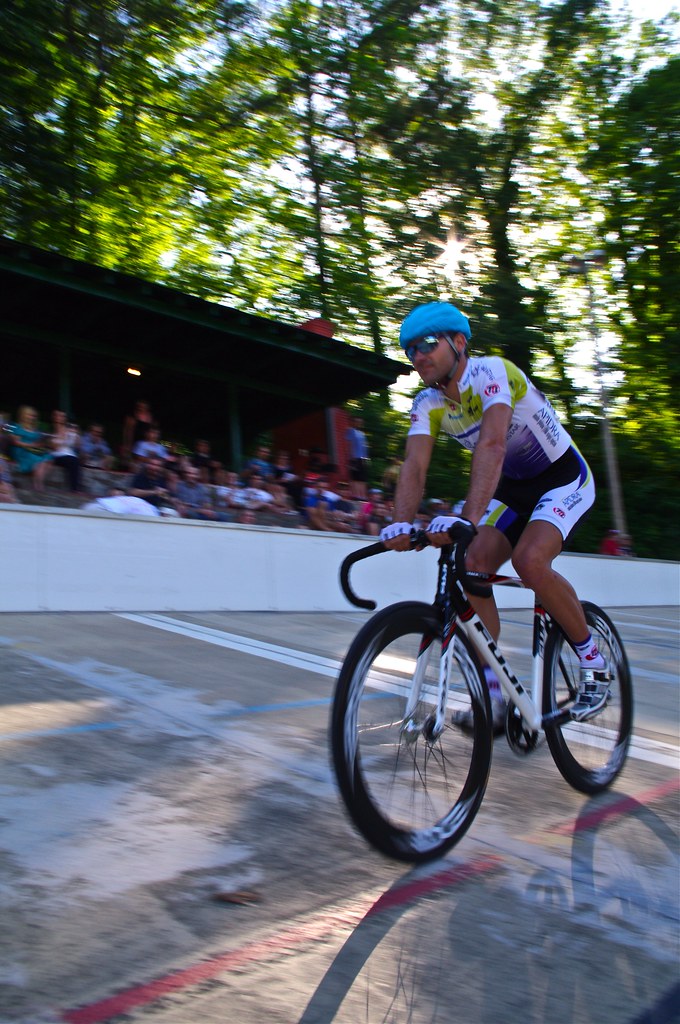 Another local favorite that both worked the crowd and stood his ground was Charles ‘Chaz’ Rossignol. 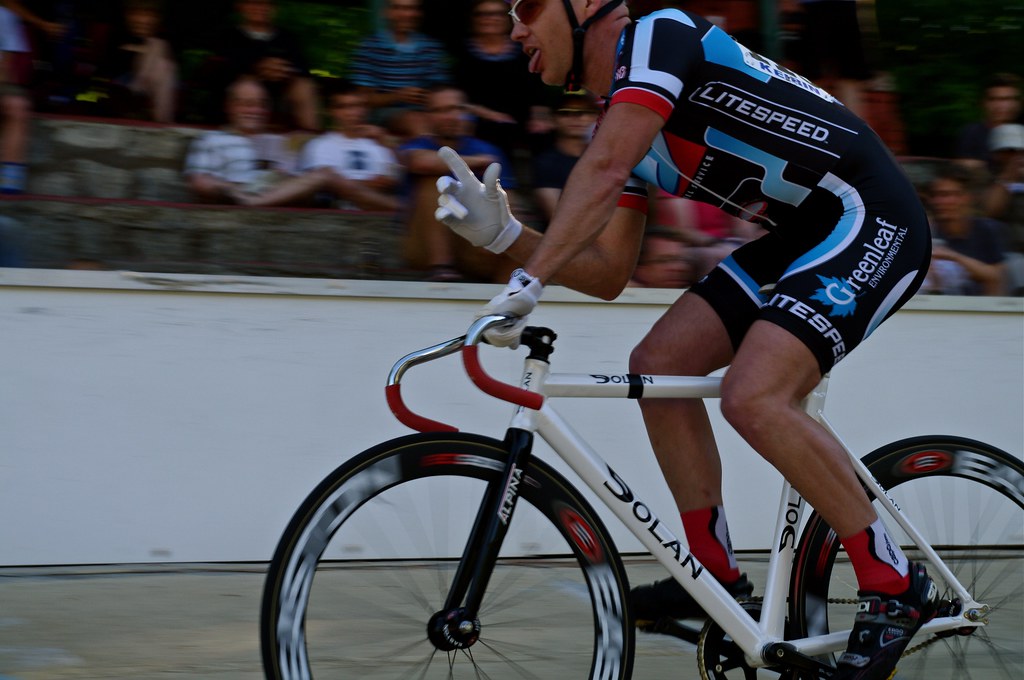 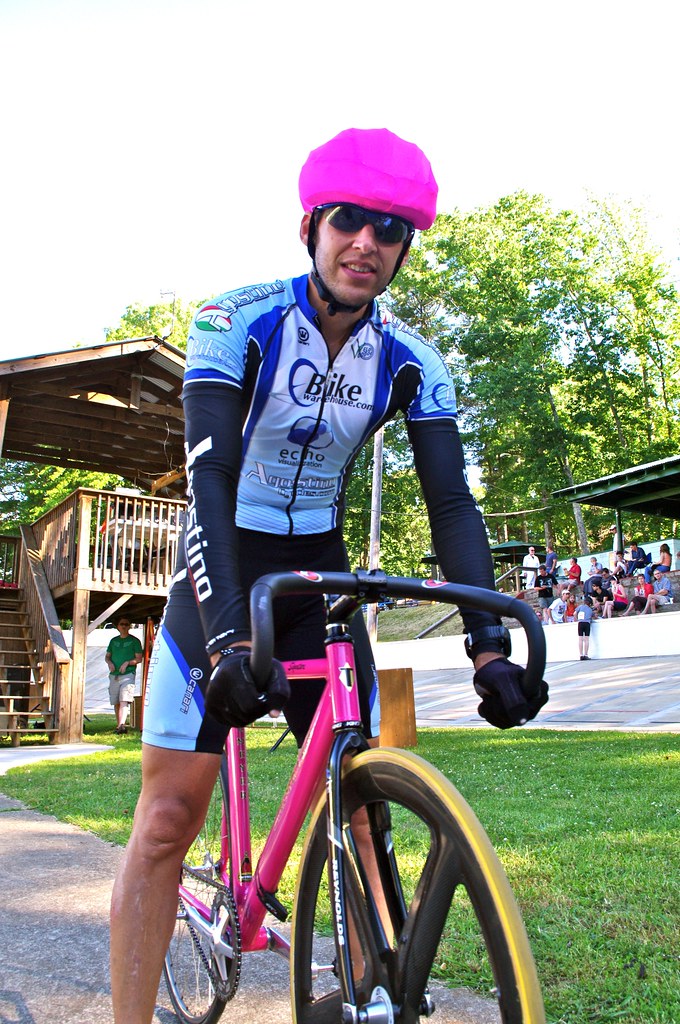 The crowd was ready. 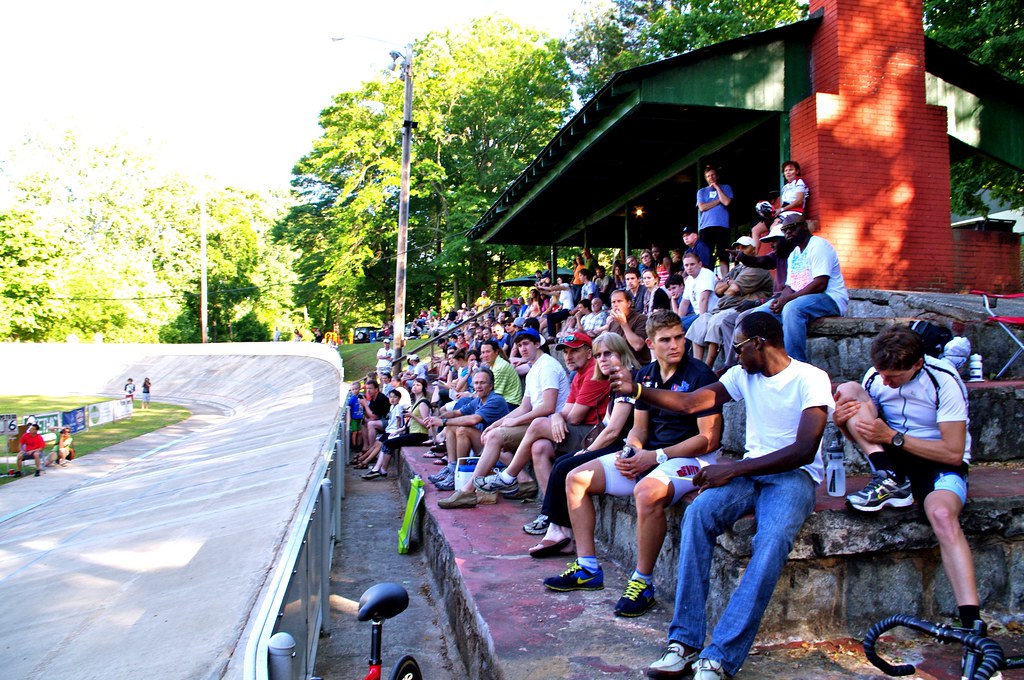 The racers were ready. 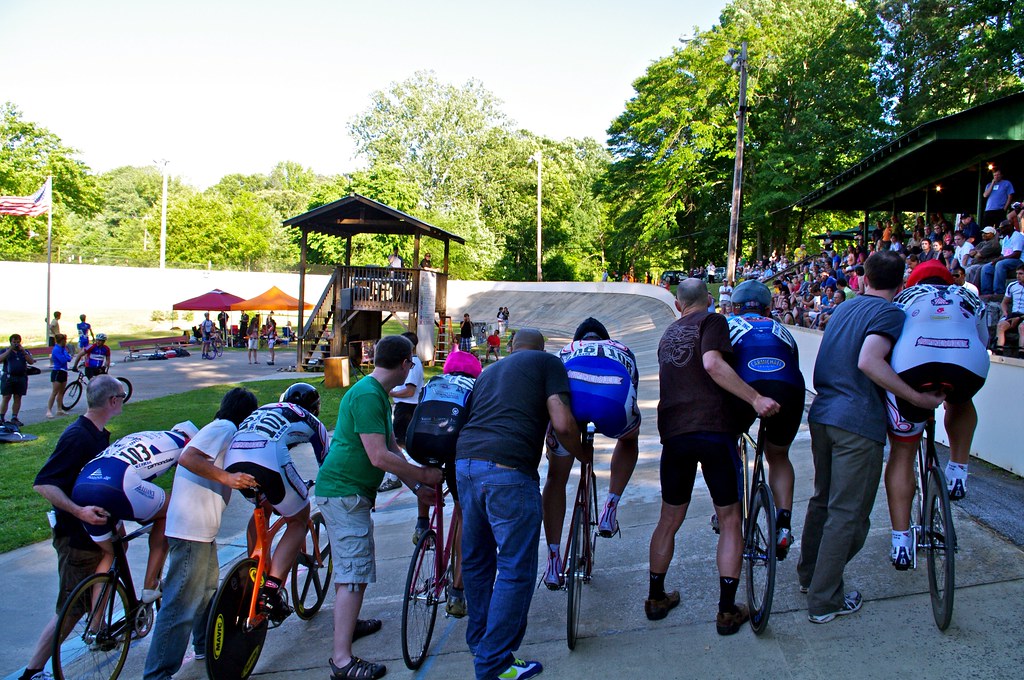 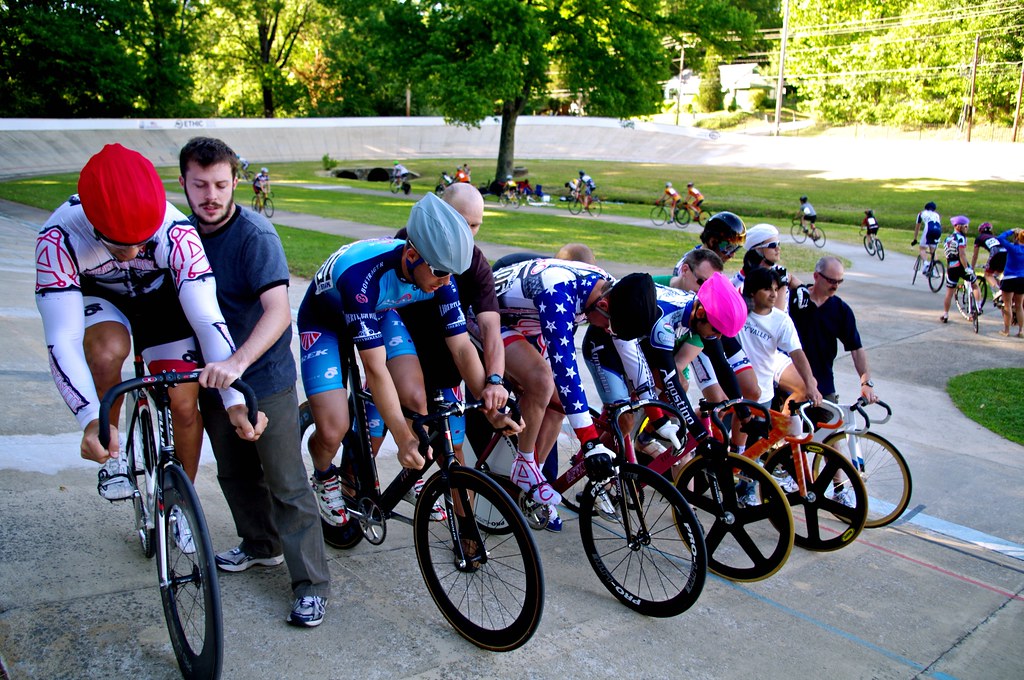 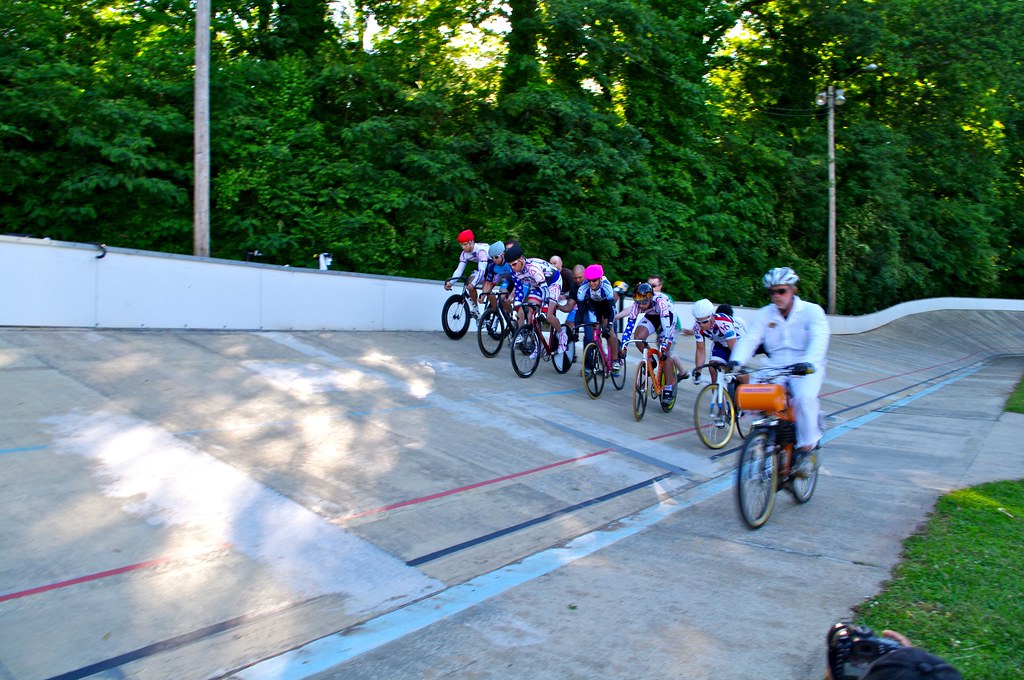 Each heat was more action packed that the last with ever more on the line, these guys were ape’n it! 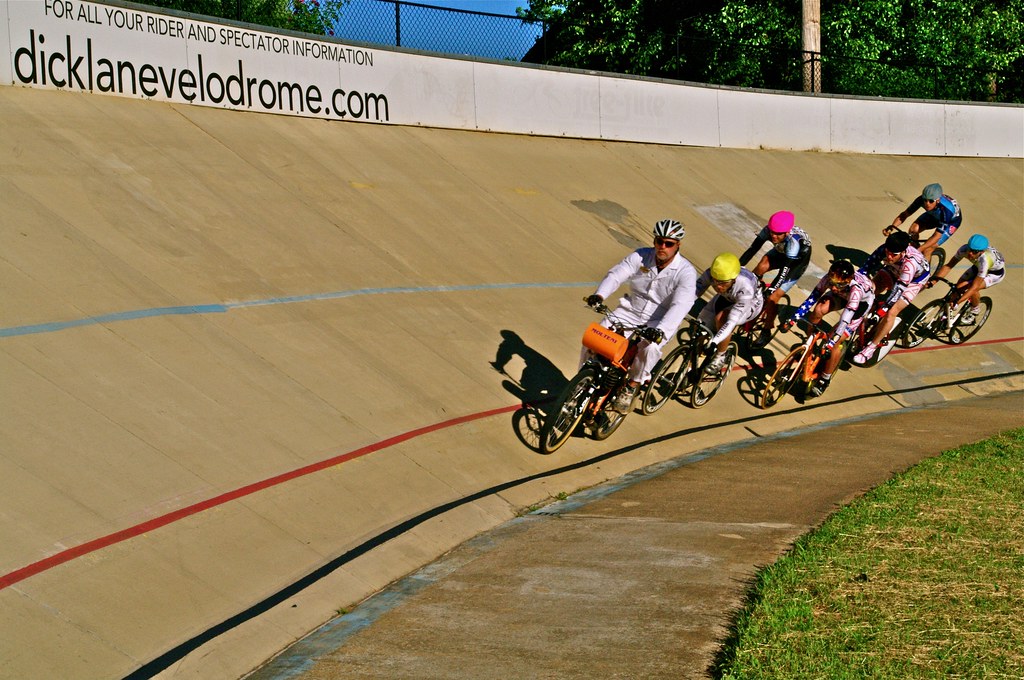 Directly behind the derny above is Giovanni Rey all the way from San Francisco!

He posted a nice write up of the event here.

Leading out below is 17 year old Matt Baranoski. He claimed second overall in the Keirin tournament.

Here is a nice shot of Matt & Giovanni throwing down the gauntlet in turn one.

As reported in the Jordan/Zephyr Need for Speed Sprints Recap, The Affinity team brought the heat!

The Affinity team posted some nice race reports on Day One & Day Two of the Festival. 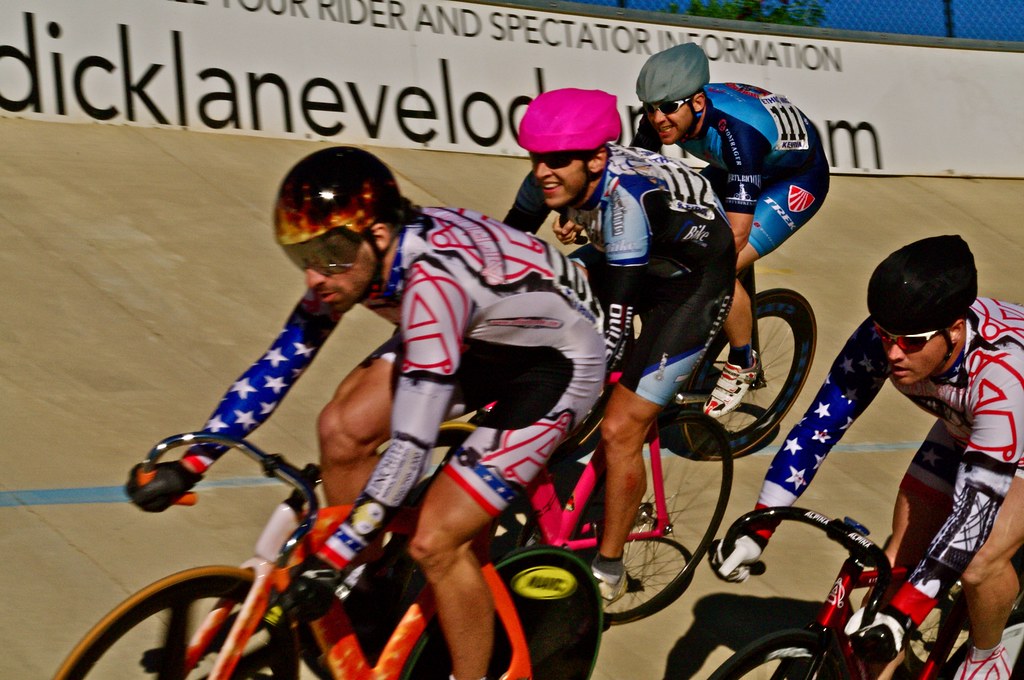 He defeated a brutal array of adversaries last year and was determined to once again sprint to the top.

Now riding for Affinity, Espinoza traveled all the way from Breinigsville, PA to defend his title. And he won! 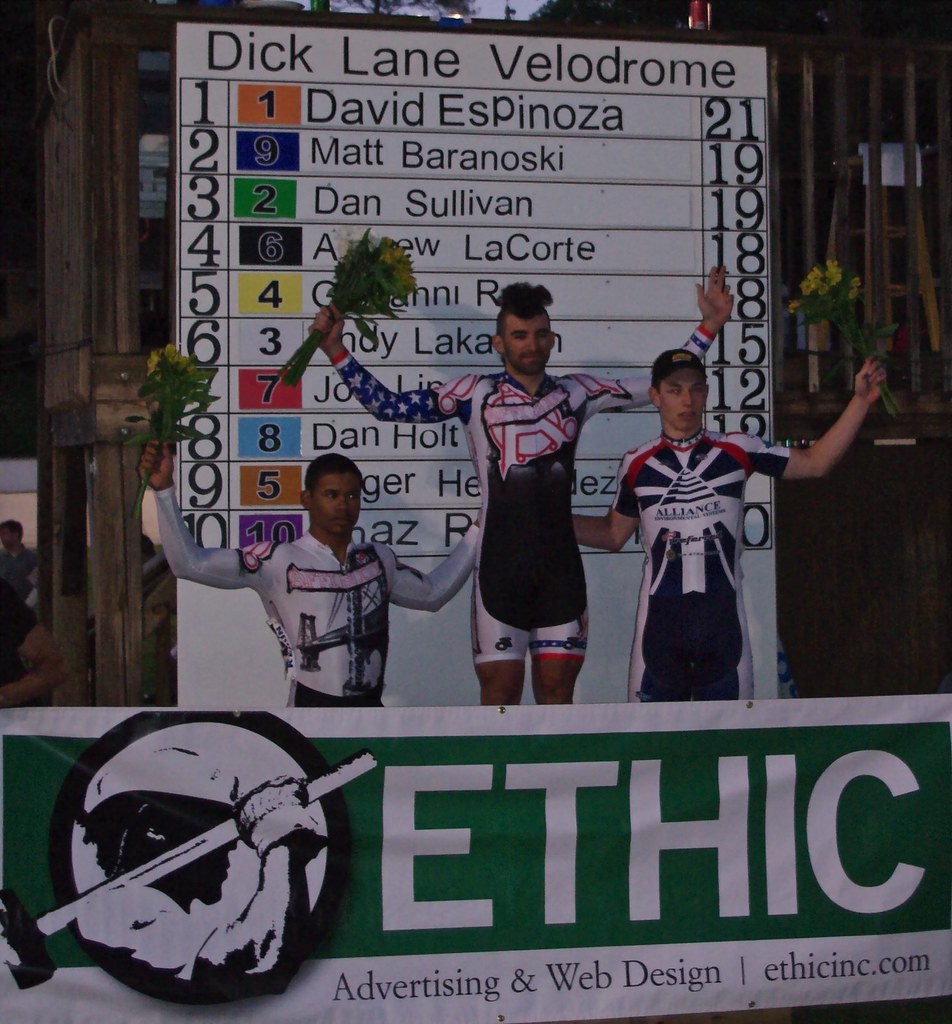 Congratulations to these dedicated racers and thank you to all who made the trip to come race at the DLV.

A very special thanks to all you made the trip down to spend a Saturday afternoon & evening spectating.

AND a big thanks to the race organizer Jeff Hopkins and all volunteers who made this event even happen!

Full results from day are here. More photos are here. Listen to the action on NPR here.

I hope to see everyone next year at The Keirin!