Back in November while I was chatting with a friend at the GA Cross race in Camp Jordan he asked me “Are you going to race Southern Cross?” I immediately thought “That’s insane riding 50 miles in the mountains of North Georgia”. At that time I was done after one 30 minute CX4 race. The cross season continued and my fitness improved and the cross races got more fun. I’d been in the gym for a bit and then the Rapha Festive 500. More fitness and a little Christmas cash infusion I picked up a cross frame and two goals availed themselves. Rome Wintercross series and Southern Cross. Rome Series came and went. 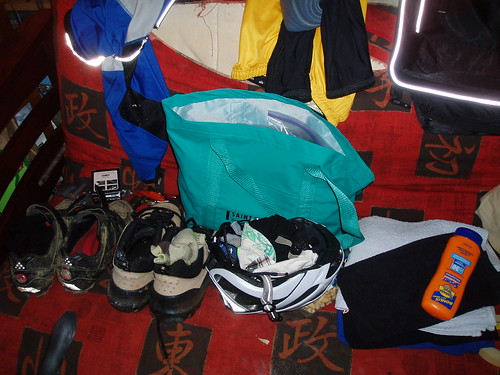 The Day finally comes and it starts at 6am. I gather everything staged from the previous night, a bowl of oatmeal,  and it’s out the door by 7. 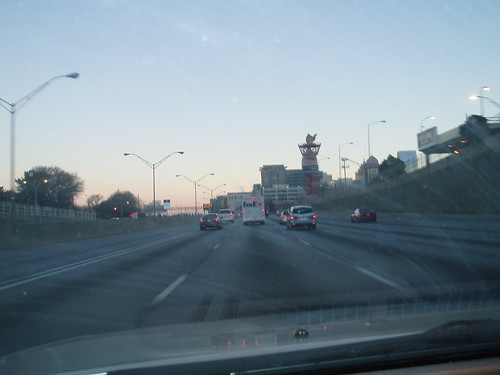 with only one wrong turn this time I make it to Montaluse Winery a little bit before 9 am. 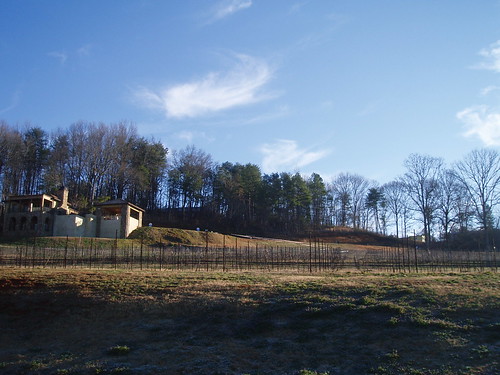 I check in and get my number and prep my bike for the start. When i start to pump my front tire up I see a 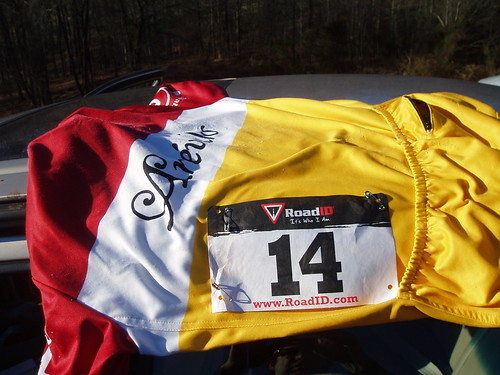 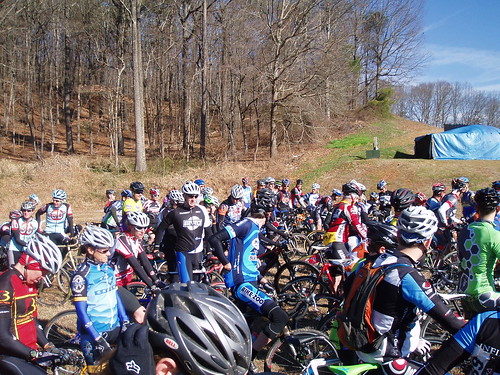 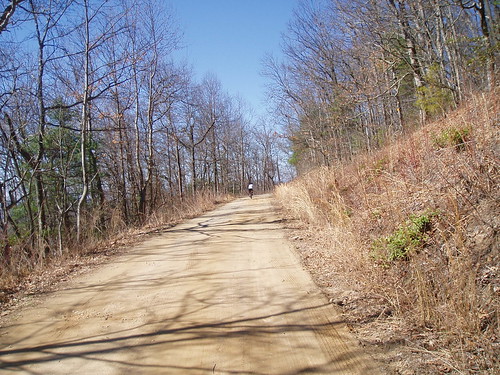 There are 200 racers at the start. The race starts at 10am. I placed myself behind the serious riders, so I am comfortably in the group as we go off. It starts on a short section of road and then a left down a hill through a grassy section of the winery. Half way down that first hill a piece of bailing wire gets caught up in my front wheel. The wheel stops and tosses me over the handlebars. I unwrap the wire from around the rim/tire and out from the spokes, do a quick integrety check of the wheel, bheck the brakes, throw the wire off of the course behind a tree, and I am on my way. I feel a little shocky and have a bump on my shin right below my right knee and a little blood. It is cyclocross after all. You are going to crash and you are going to bleed at some point. I got mine over early. I just lost about 50 places. We leave the winery, make a left and find myself on a winding piece of 1 lane tarmac with 20 degree banking in the turns. Really nice! At the bottom of the hill the asphalt stops and we are on fireroads in the National Forrest and the unmade road then pitches upward. We climb and wind through the forrest. I pass some riders and some riders pass me. Then the pitch gets steeper between 6 and 9 percent. Then about 20 minutes later it pitches to 12 and 15 percent, maybe more. I stand on the pedals and the back wheel fights for traction. All I hear is my breathing as my heart jumps out to the road in front of me and says stop! I walk up the rest of this 300 meter section with the single speeders. When the grade gets back to a reasonable 7 percent, I hop back on the bike and climb some more. I finally make it to the first section of ridge. Blood finally goes to my brain and my legs start to recover a bit. Now I’ve loved watching the Belgian classics in the springtime with the cobbles and never had the illusions that I’d rode over anything like that. Broken road in Dekalb county does not a pave road make. In Ghent-Wevelgem classic the riders used to decend the Kemmelberg and i would think “It’s not that bad”. I can 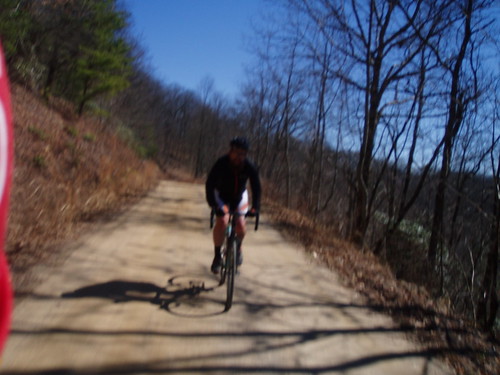 and we ride together for a while. We make it to the first SAG point at 12.5 miles. Josh says “It;s kind of depressing that we’ve only rode twelve and a half miles.” We catch up to the guy i front of me in the picture by the time we crest the first mountain at about 16.5 miles and on to the first decent. i immediately overcook the first switchback, but no too badly. There was runout that a I didn’t use much of. Now that I feel the lack of stopping power in the bargain brakes I purchased, I continued careening down the side of the mountain in the drops with two fists full of brakes. My legs and arms are screaming at me. There is no comfortable position on the bike while doing this. The pitch levels out a little and I can let the bike run. Grab the brakes hard before the start of the switchback and dive through the apex. It is alots of fun but all I want to doe is get to the bottom of this hill to make the suffering stop. Finally after 15 or 20 minutes we are in the valley and can pedal again. I finally realize why some people become really good descenders. It’s to they can get the hell off of the mountain. Tarmac for a mile or so. Whirr go the knobby tires on the road. The sign on the side of the road says “Pavement Ends”, and it did as we head back into the woods. The dirt road had large rocks protruding from it so you have to continuously scan in front of you to pick out the best line. 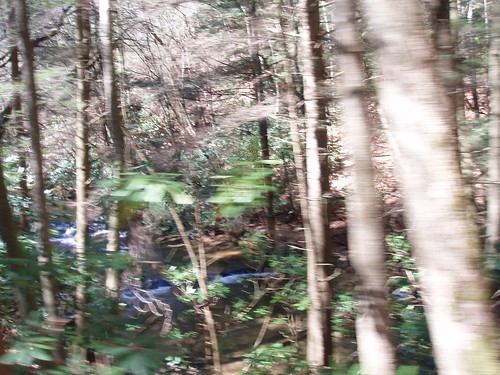 Some times there were no best lines. We wind through the valley floor along a stream. You had to be really careful to watch the road. There are points where the scenery war so perfect and serene that you expect to see cherubim or unicorns drinking from the stream. That is where the biggest potholes were! Josh and I chat and trade pulls as we continue along the valley floor, past camp sites and cookouts and some hunters. We start the second climb and josh just goes out the back. I get a very nice tempo and start passing lots of riders. I finally make it to the second sag point and trade out bottles and get a few more gels. 20 miles left! I ride along and pass this brother from Pensacola FL. this is like the fourth time I passed him. I’d drop a chain and he’d pass me and I’d pass him back. I stopped for the SAG and her passes me and I passed him back. We chat for a bit and he says that he and some of his buddies are going to start making the trip to Atlanta to race on the track. Bring it, Pensacola! I get over the top of the ridge and there is a woman riding the second decent really well. I catch her wheel and follow her down the perfect lines down these hills. We get to through the first half where it levels out. I mentioned that she looks really good on these roads. She and her husband got a cabin in the mountains and she rides there all the time. I told her thanks for piloting me down the previous decent. I mentioned that this was the first time for me to ride a legitimate mountain and she expressed that she was impressed with the fact that I could follow her and mentioned that the next section was a bit rocky. There was a pitch up and she didn’t keep my wheel.

now say that I have made a decent on a road that is worse! I was thinking about a pave road and was wishing that the stones were so evenly spaced and uniform as I flew down the mountainside hell bent for leather. I only lost one water bottle and was praying to keep the other. It seemed that the whole torturous decent would go on forever, diving through loose gravel switchbacks, again plummeting as fast as I dare just to get off the mountainside. Then it happened! TARMAC! the end of the decent, a 150 degree left turn and 8 miles of road to the winery. I saw 3 riders in the distance. i didn’t really try to catch them . Just turn the pedals and make it to the finish. It took about 3 miles to catch them, but I did and on a small climb. There were thoughts of just hanging onto their wheel but it was more important to keep a rhythm than anything else. So I towed them most of the way to the winery and another guy took a good pull. A right into jthe winery entrance, a right heading toward the finish line, then there was a guy in the road waving. Telling us that the course took a right off road and up a hill. This was the BONUS run-up that Eddie threatened us with at the start of the race. The race marshall’s buddy was threatening the riders with free beer before the run-up. The other three in my group succumbed to those threats while I continued on up the 30% grass ill that continued for about 150 meters. Eddie later said that the rece winner rode up three quarters of the run-up. It was pretty classic cyclocross from there. Between some rows of grape vines and down a muddy path next to a pond. up two more grassy hills and down the street to the finish tent. I finished! My time was 4 hours 20 minutes and some seconds. That put me after 5th but i don’t know the placing. The Distance was 50.1 miles with a little over 6400 ft of climbing (and descending).

I hang around for a couple of hours until the awards ceremony. I didn’t win anything in the race. The fastest 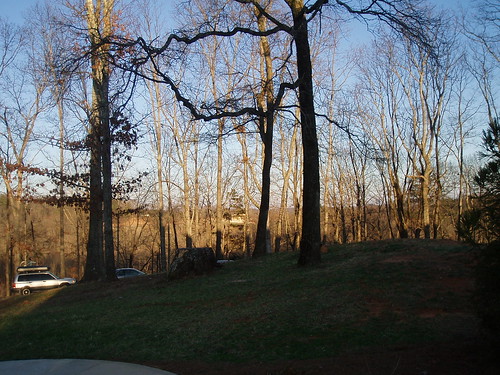 time was 2 hours and 59 minutes for the full course. I think it was Thomas Turner. i doin’t know him but the regular racing crew do. I did get a couple of things from the raffle. 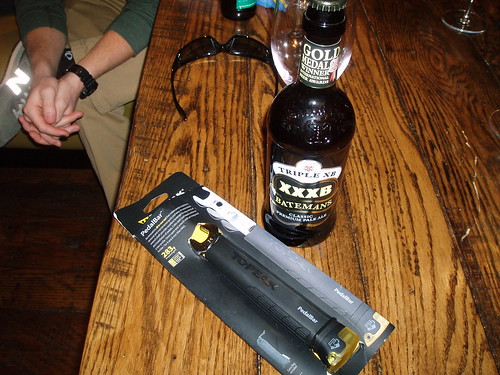 And the sun sets on an epic day of riding. Just an hour and a half and I was home. 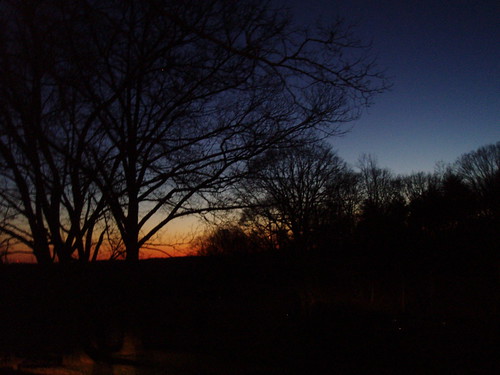