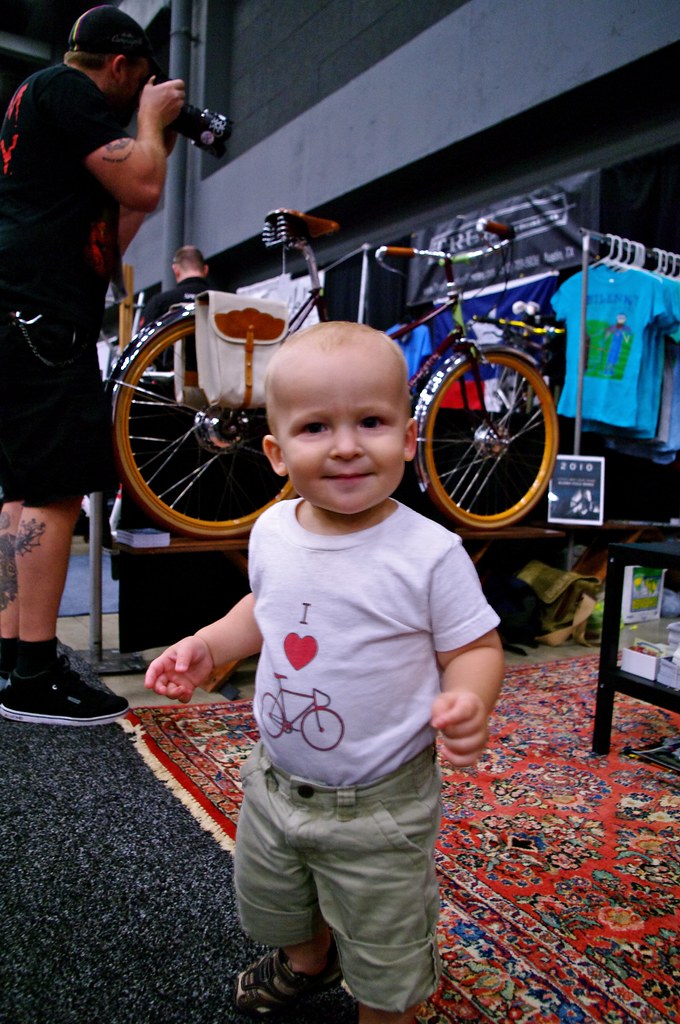 Leading up the this year’s NAHBS I asked John if I could borrow a bike.

Without blinking he said sure, ride my KHS. “By the way, would you like to contribute to the blog?”

Of course I did. But the days in Austin proved to be shorter than expected and I ran out of time.

Now eight days later and the photo above still depicts the scenario rather well.

I was focused on daddy duty with my son Otto, pictured above, and though I compiled some great shots,

any effort I could offer would have been a mere drop in the Prolly bucket of exhaustive NAHBS coverage. 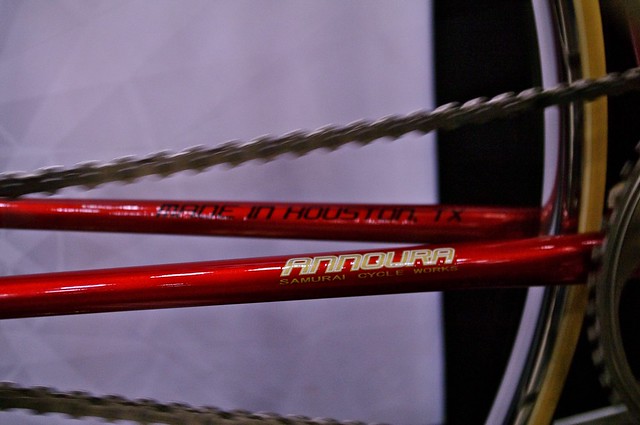 What I can do is say that this NAHBS, my third, was the best yet.

and here’s the eight reasons why: 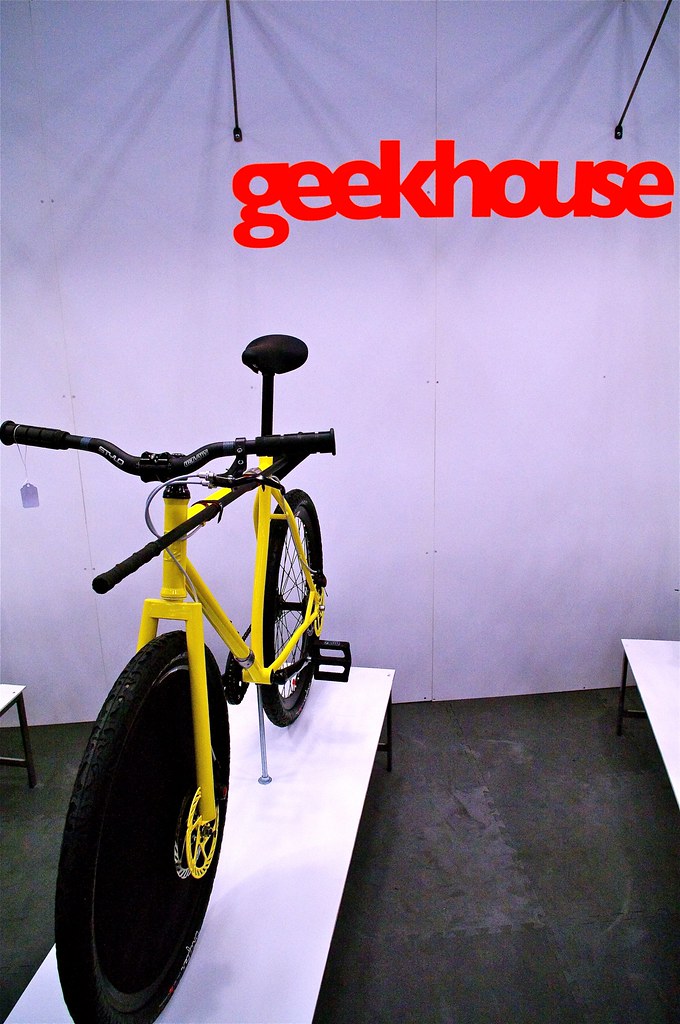 Geekhouse above and Gallus below built some bikes ready for extraordinary abuse.

Geekhouse had a great booth too and Jeremy of Gallus once won an alleycat to win a taxidermed calf.

Their custom bashguards were awesome. 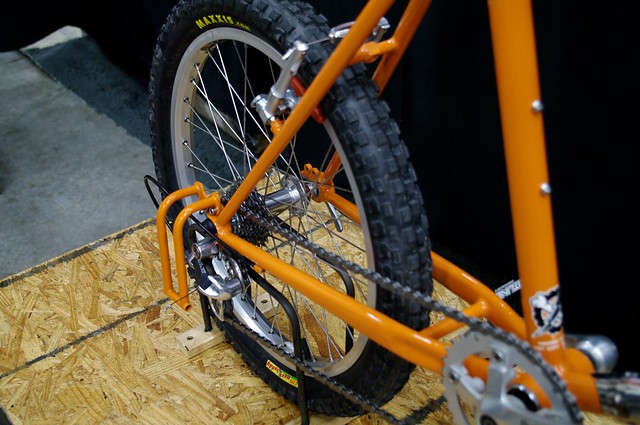 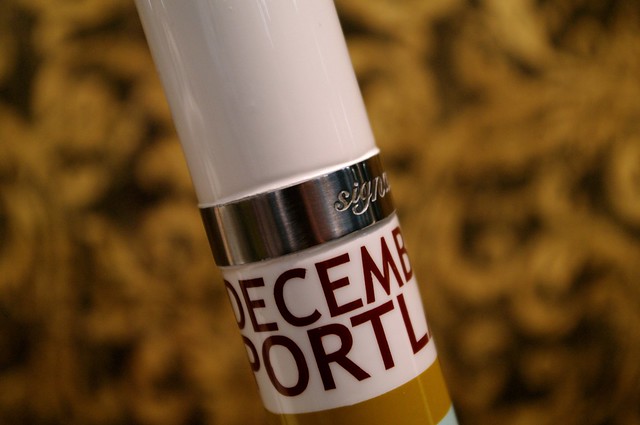 The level of detail really does get better each year.

In fact, feel free to comment linking to your favorite detail from this year.

Signal Cycles above stepped it up with intricate features and ever more in depth craftsmanship.

The stem and bar combo below from Vendetta Cycles was the pinstriped capstone to a stellar build. 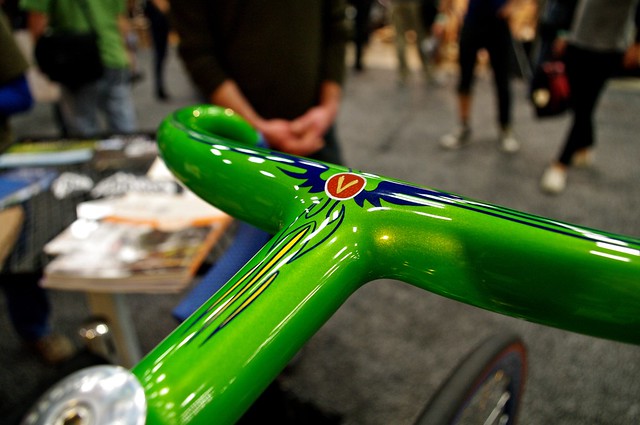 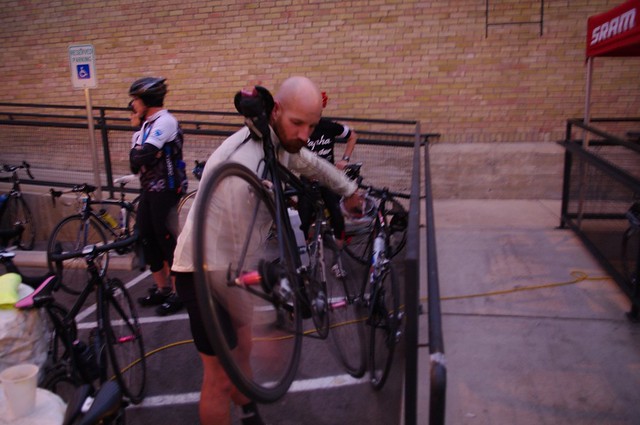 Rapha has become a staple at NAHBS.

Their support of  US framebuilders is something I applaud them for.

and the premiere of their Continental film made this year’s event even better.

Above is Continental rider Cole acting as his own bike stand and a still from the film below. 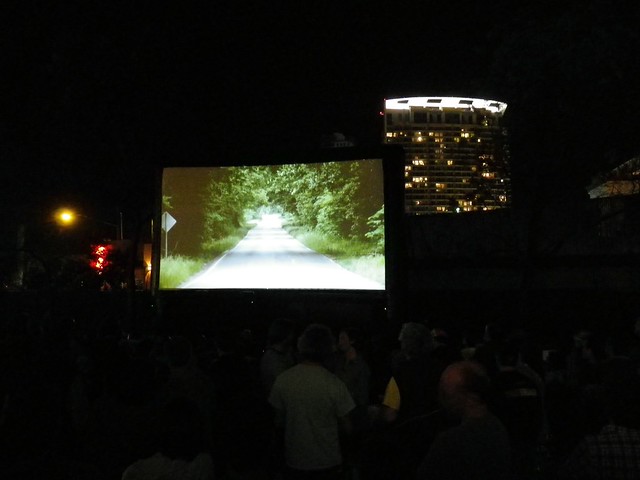 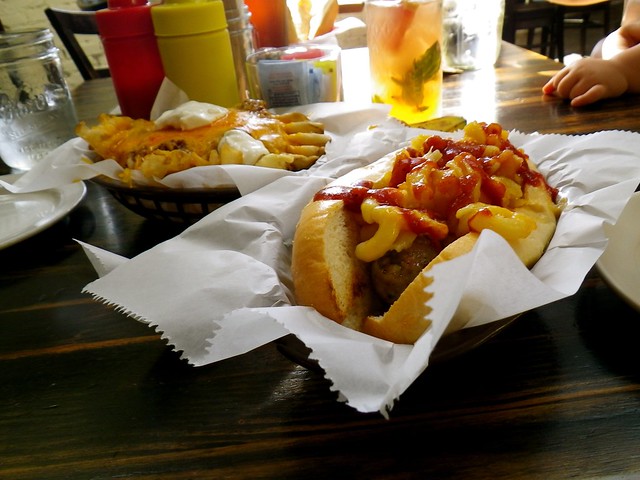 The food in Austin is great.

I had the chance to try out some cool spots: Juan in a Million, Torchy’s and Frank’s.

Frank’s was so damn good.  I went on the suggestion of a local messenger and am so glad I did. 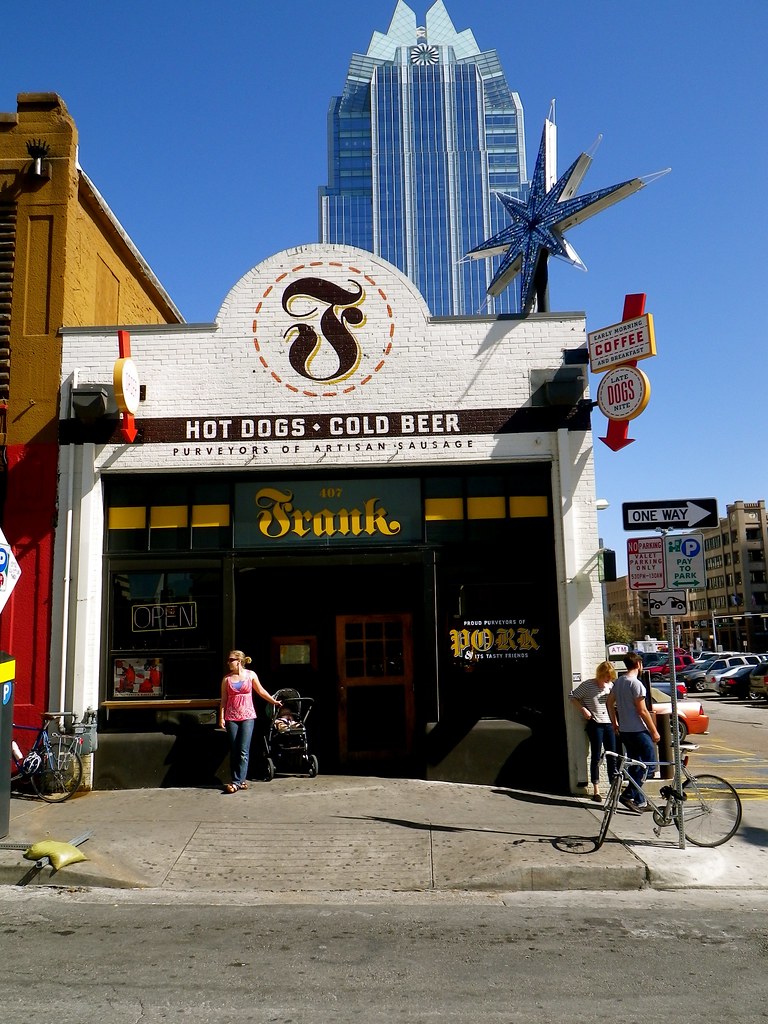 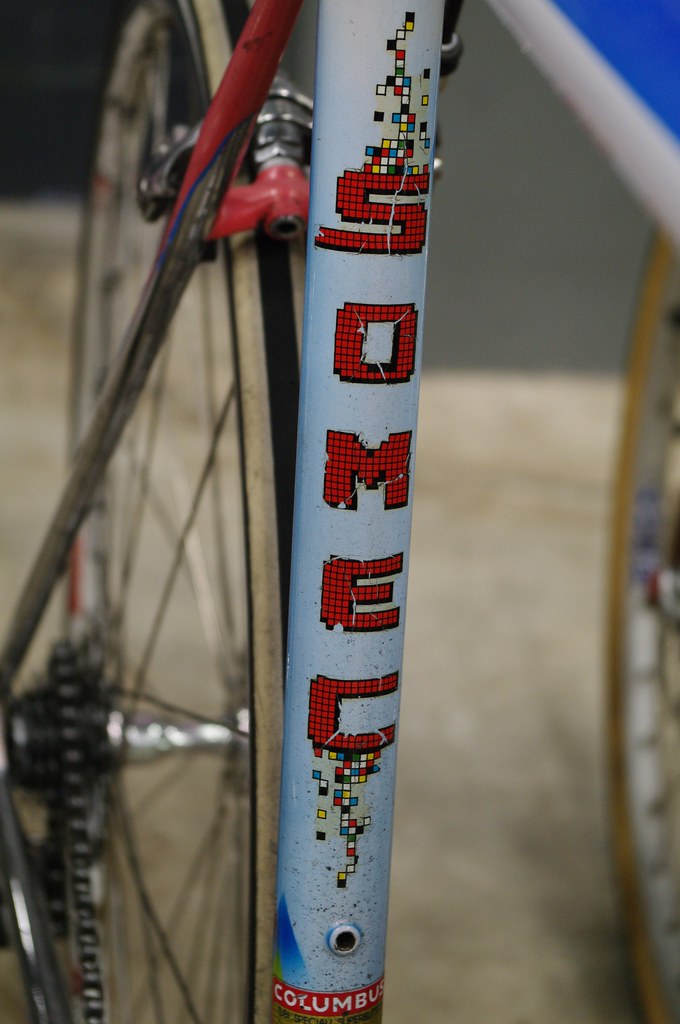 leaning in and finding gems like the Somec above and Bishop below.

Every year some of the most customized bikes can be found both in here and locked up outside.

Again, 2011 took the cake for eye candy on the showroom floor and the valet corridors. 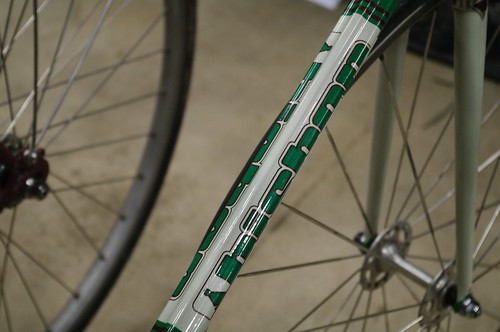 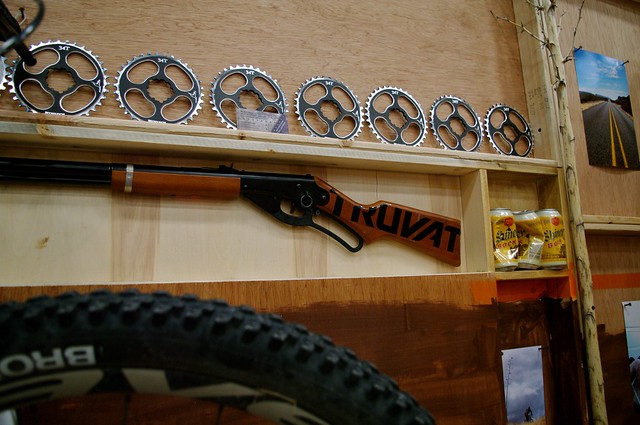 Sure last year had some EPIC booths.  I’m looking at you Bilenky & Vanilla.

But this year was about minimalism.

Clever ways of conveying the emotion beyond the frames is a challenge.

Black Cat Bicycles and Vertigo Cycles both had some neat booths.

Aaron of 611 salvaged nearly all of his. 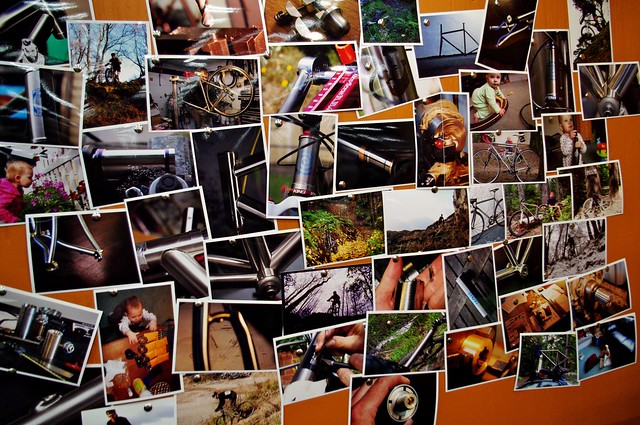 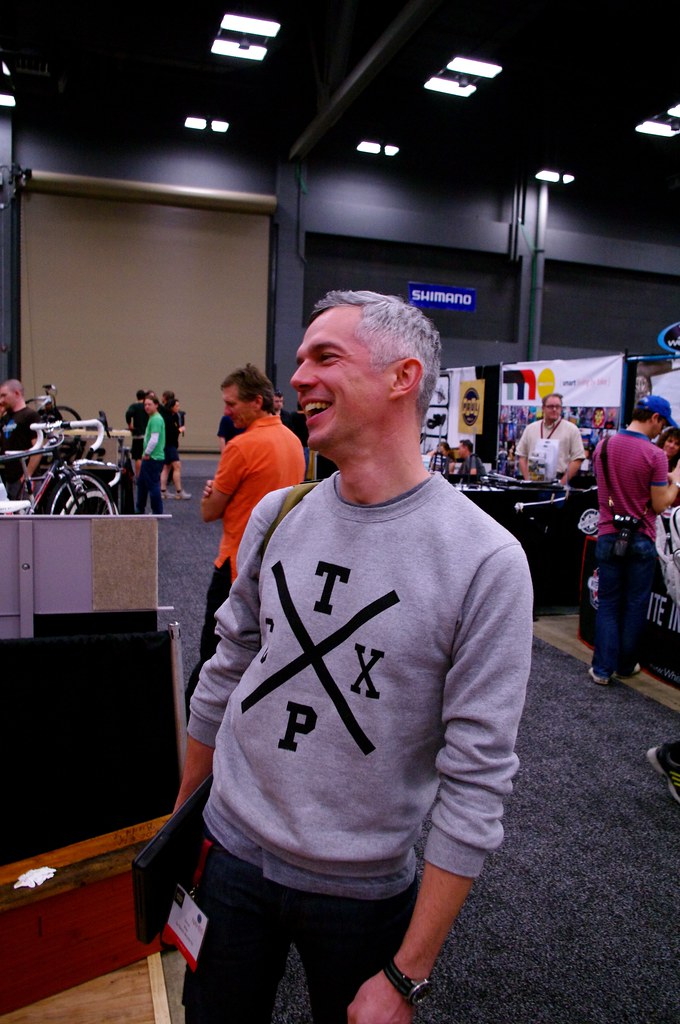 NAHBS is great to meet and greet not only legendary framebuilders

but also friends you haven’t seen in ages or ever before.

Above is Simon of Hipster Nascar.  We only met in person for the first time this year

and sadly he took a brutal spill on his bike that same night.  Get better man!

And below is Jordan Hufnagel of Hufnagel Cycles.

I race a frame he built on the track here in Atlanta and am always stoked to see him. 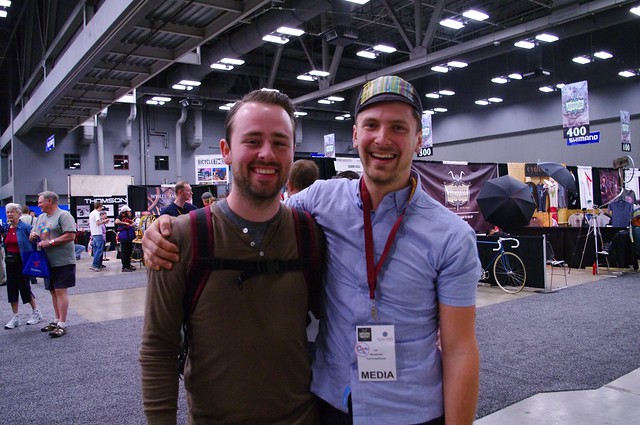 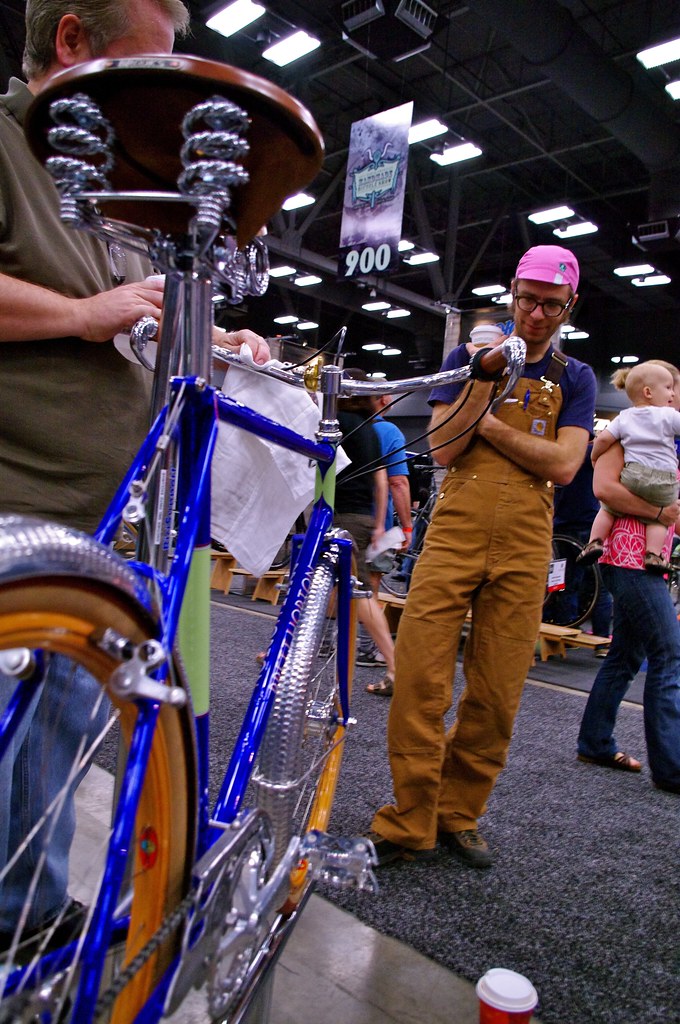 Above, Bob from Bilenky studies Bishop‘s counterpart to their contribution to the pair of Horton bikes.

These bikes were insane and the idea was totally unique.

I have heard of builders teaming up and collaborating in one shop or the other but this was one of a kind.

Ultimately this concept, the bikes, their detailed implementation and final results took the cake for me! 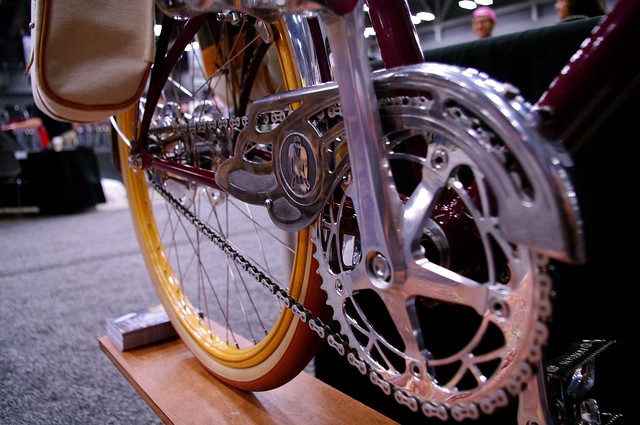 Well there you have it, my take on the eight best things about this year’s NAHBS.

For more photos check out my flickr and feel free to comment with other best of’s from this year.