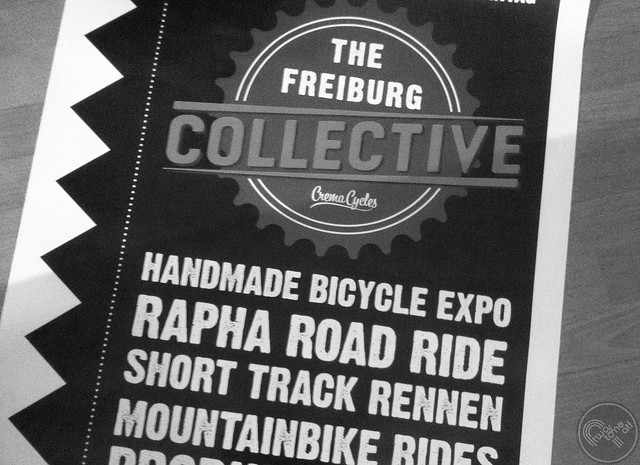 A wide range of bicycle related activities and events were offered, such as guided MTB rides in the

surrounding mountains, an entertaining dirt park short track race on sunday as part of the

Black Forest. Along with a small but no less respectable expo of a number of celebrated national

and international bicycle brands and some custom frame builders. 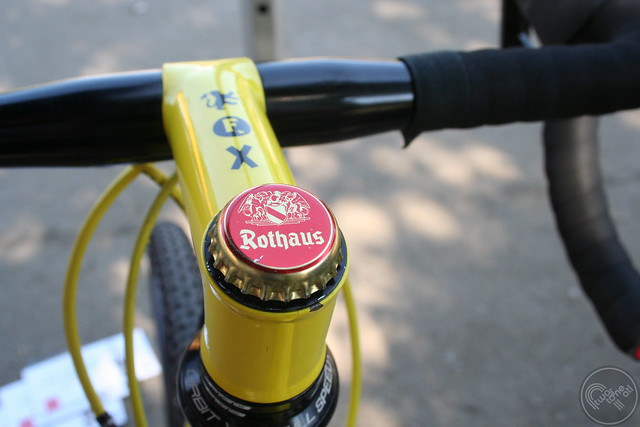 cyclist. You might have watched some of the videos showcasing all the Fixie Inc models as these

have been praised on prollyisnotprobably.com – I originally planned to visit the guys in their office

this past December, but it didn‘t work out in the end – even better to meet Recep, one of the owners,

in person now and to have a look at their decent bikes. The „Chip Race“ Titanium-roadbike and

the „Pureblood“ Cyclocross-Beast were definite eyecatchers (check out the bottlecap on the stem).

Too bad there is no proper distribution in the US yet. 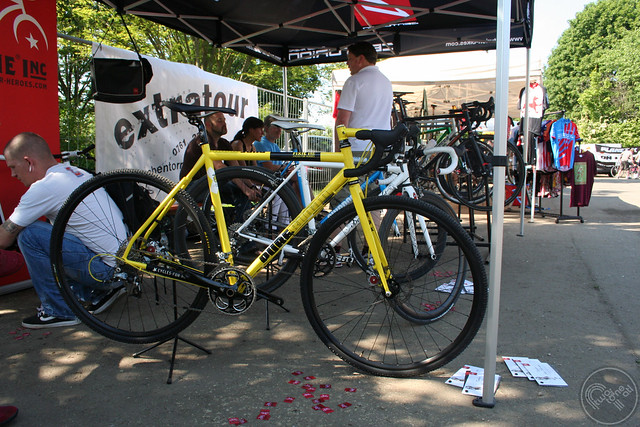 After that I went straight to see the bikes built by local frame builder Kai Bendixen, who had also

developed some of the Fixie Inc prototypes in the past – a small world, indeed!

bottlegreen Randonneur-Touringbike. I am planning to meet Kai at his shop later this year

to show you more of his work. 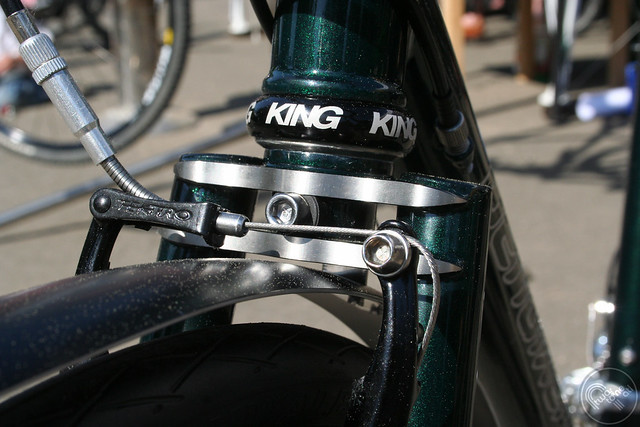 Another great framebuilder I got to meet was Thomas Veidt, who specialized in building bikes for

short people – but of course he is up for anything if you plan to get a custom frame. He brought

a workbench with him and was carving lugs when I got to his booth. One of the bikes he was

showcasing was the first bike he built after he started his own framebuilding business years ago:

the late 70s – this bike has been used alot and was far from a perfect untouched condition, but had

soul and style for sure. After miles and miles of riding this bike is now sitting in his living room

he said, just to look at it.

Bicycle Show“ – an expo way more down to earth than the over-hyped NAHBS he said.

It was great talking to you Thomas! 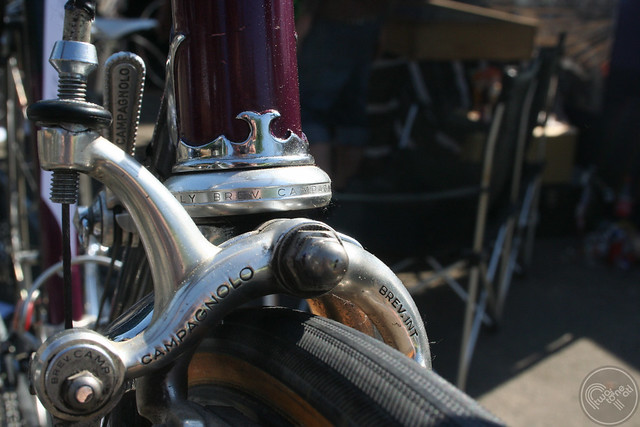 I didn‘t spend much time at either the Campagnolo or Chris King booth, but I am sure their high

quality components were well received by the bicycle-loving crowd. Now it was time for an

snacks – all organic, of course! 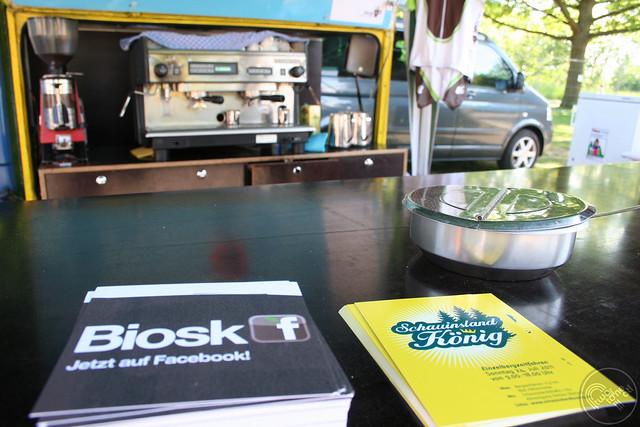 My next stop was at the Crema Cycles booth were I talked to Basti for a little while. Crema Cycles

and Independent Fabrications over here in Germany, they organize events such as this „Freiburg Collective

More of these frames will be shown at the Eurobike in the summer. (Expect twotoneatl coverage!) 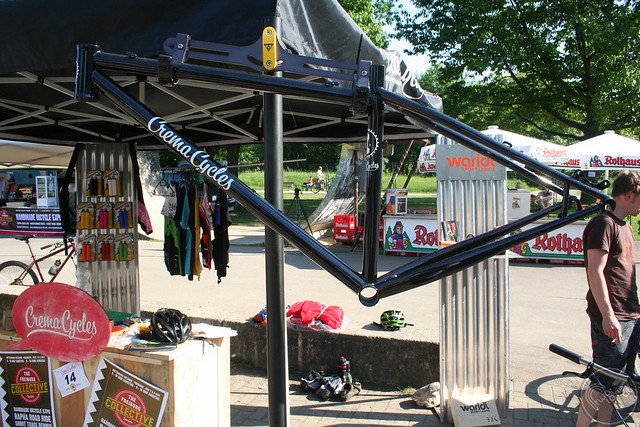 Other exhibitors included German magazine „Fahrstil“ and Italian Cyclegear brand “Biciclista“, who are

famous for their colorful cycling kits.

support Rapha and it was a pleasure to put together a route for the ride. Inspired by my post from last

year, Kieran of Rapha Germany asked me to come up with something similar. The challenging terrain of

the ride included three climbs, one of which the Schauinsland-mountain with its 11km ascent, it was the longest.

Outstanding views were guaranteed with this route! 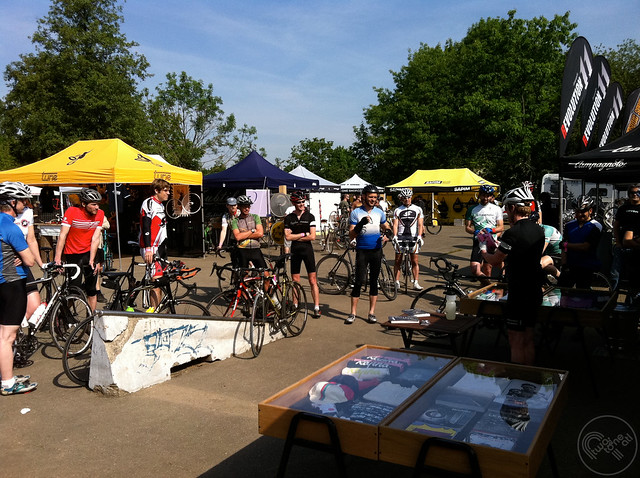 up for the ride. After Kieran’s introductory words everybody got on their bikes and we were ready to roll.

was waiting for us. Of course we didn‘t stay together as a group the whole time, but we all met again on

top of the Schauinsland where snacks and drinks were served. All this worked out surprisingly well and the 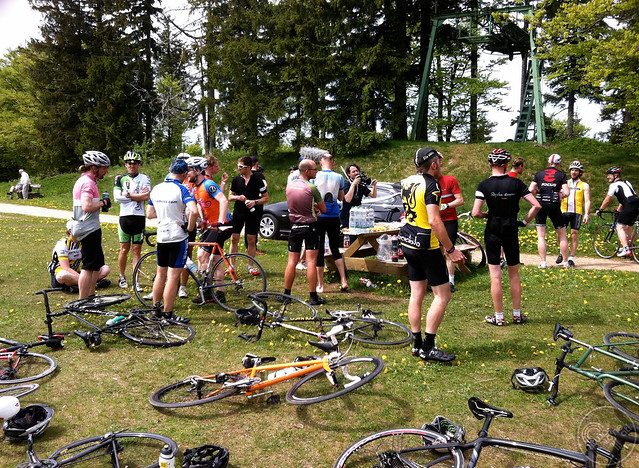 After a breathtaking descent into the Münstertal valley with topspeeds well over 70km/h, some short

dirtroad and gravel parts, more climbing and great riding through vineyards we got back to the

Expo-grounds about three and half hours after we had left. What a great experience to ride with all these 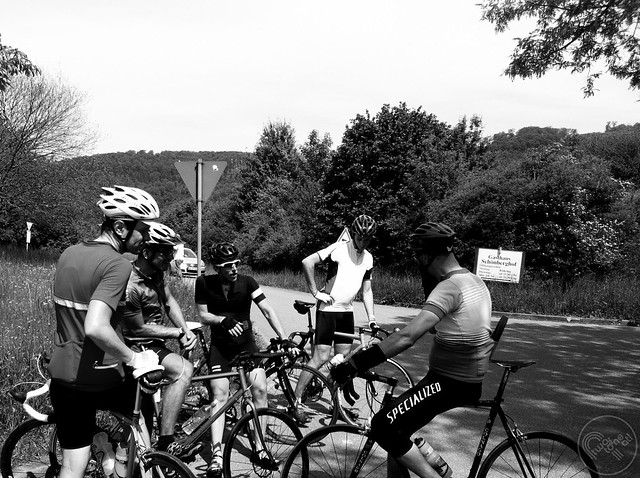 over here. So far the German market has been more or less neglected, but I am sure this will change

from now on. And what a way to start activities here in Germany. 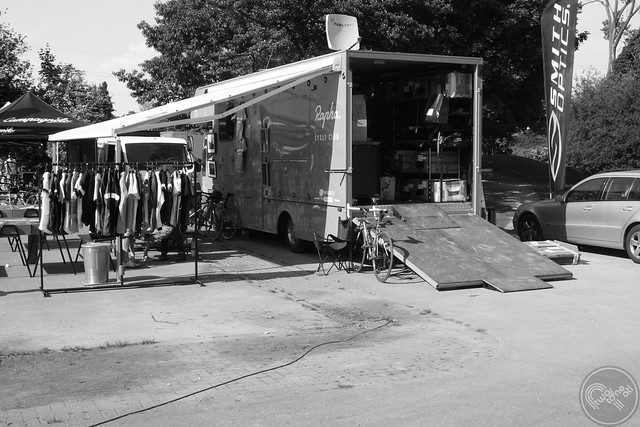 Overall this has been an awesome weekend – amazing weather and great people! Freiburg really is

In other news, I am totally stoked that Jon and his family will be spending the summer here in Freiburg and I am sure

this will lead to many more posts on the blog. Can‘t wait to show you around Jon!

More photos can be found on the European Touches flickr

PS: You can also follow me on twitter for irregular updates from the cycling world over here …

Check out the video of the ride here: twotoneatl.com/2011/05/18/rapha-rides-the-blackforest-video