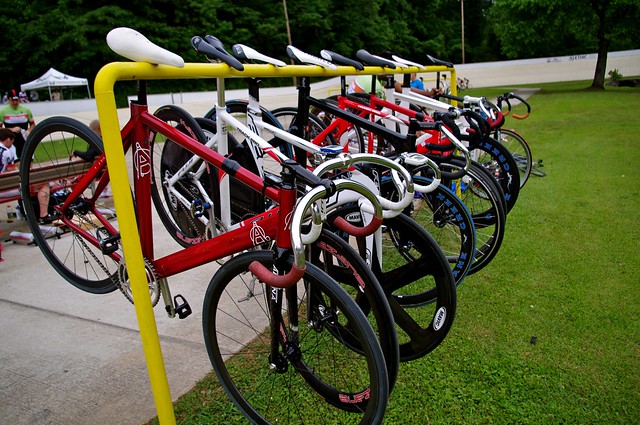 Pictured Above, Alex Farioletti’s Affinity Kissena all the way from Hellyer in San Jose!

Check out his tumblr!  Great racing video, training insight and taste in music. 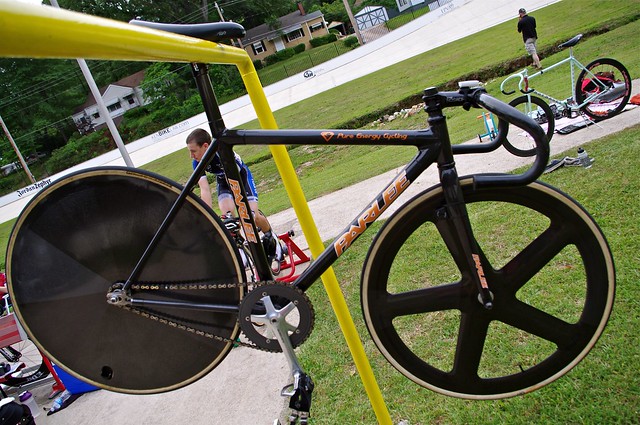 Above is Andy Lakatosh‘s totally killer Parlee.  oooohhhhwheeee!  Is this thing sweet.  Damn! 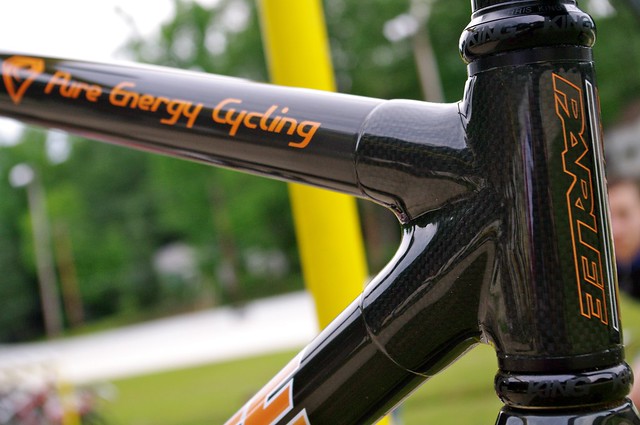 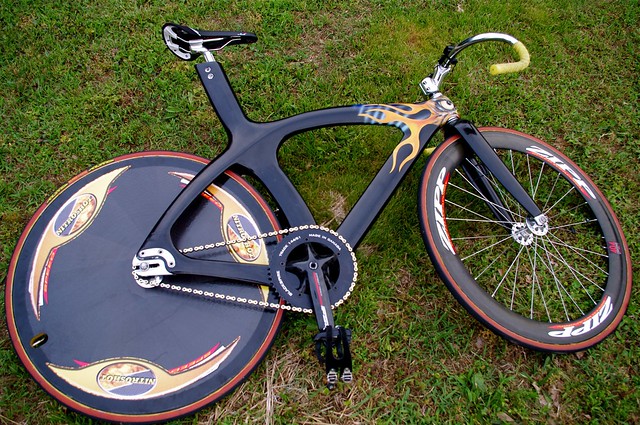 Serenity is a relativity new player in the elite track frame market putting out a great product.

As a generous supporter of our track and exhibitor at the Keirin, I got a chance to get a closer look.

More photos and highlights on these bikes being posted soon. 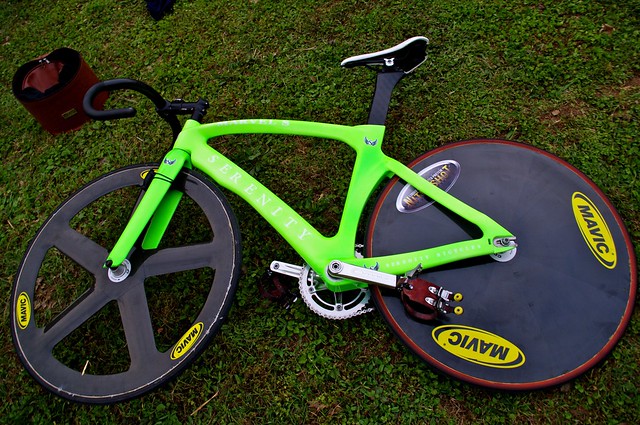 On that note, there was not one but two Chameleon Marvels on the track Friday night. 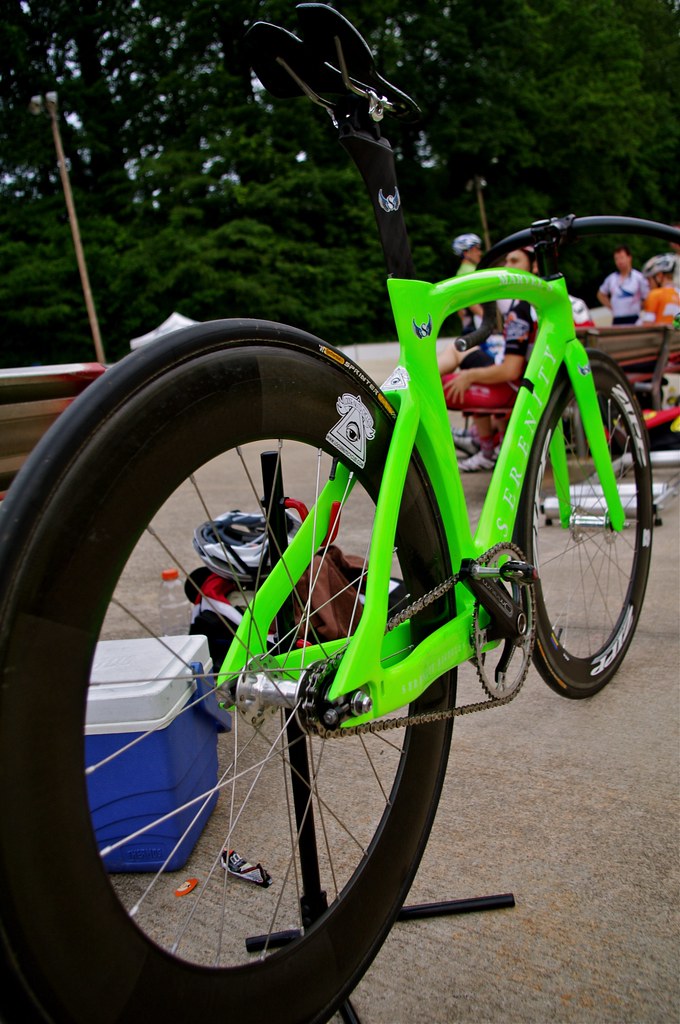 This was my first Festival competing with Faster Mustache.  A group of cyclists i have known for years.

We’re all not getting any slower and have a solid team lined up for the 2011 season.

Warming up below is Jason Atwood who road to the track with race wheels mounted behind the saddle.

More photos of that custom carrying system soon.  So practical and easy to ensure your tubulars are happy. 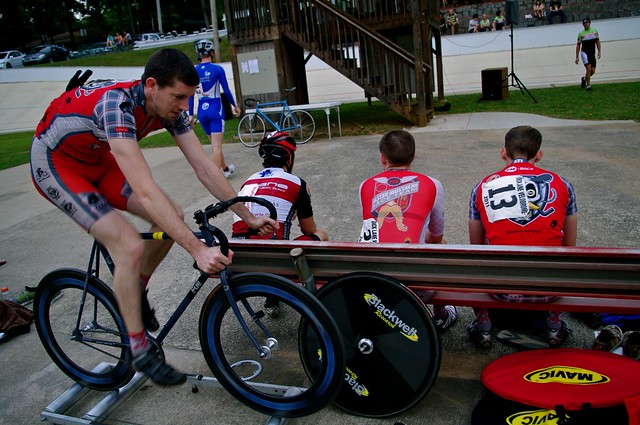 The ‘Muscles from Miami” Alexander Gil showing off some trackie skills on his road bike between races. 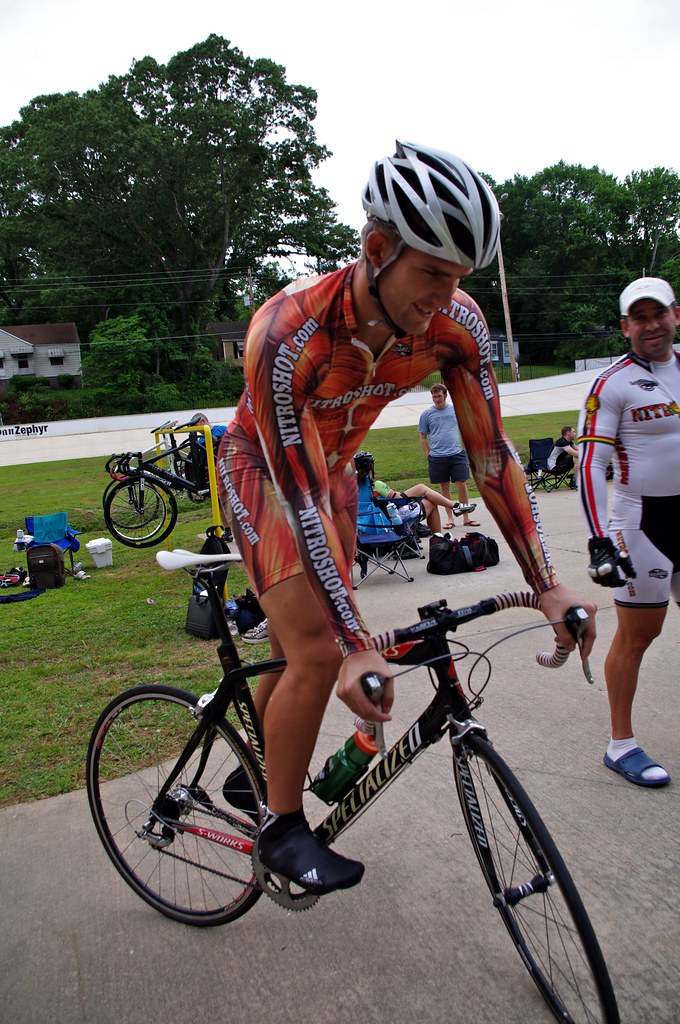 The 200m TT qualifiers for the Need for Speed Sprints. 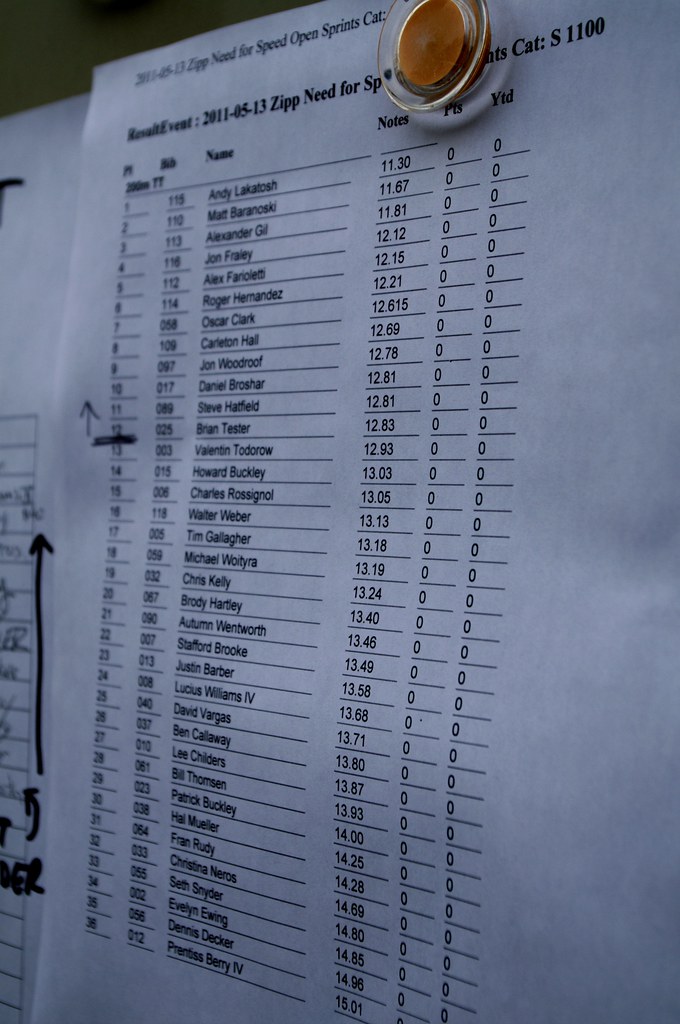 A five lap repêchage earned Valentin, below left, back into the tournament to face off against Andy.

This wasn’t in the bag for the T-Town native as Dick Lane local Valentin had a few tricks up his sleeve. 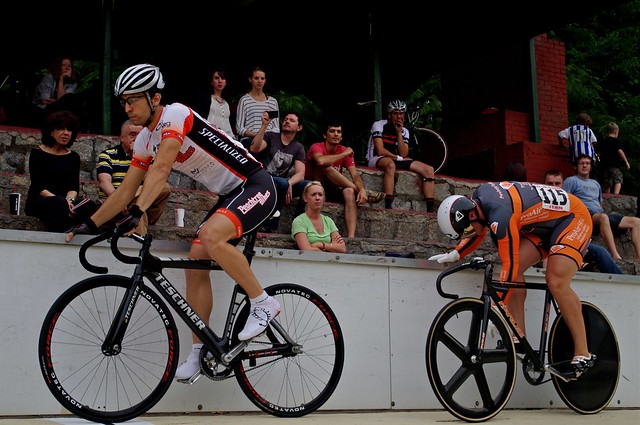 In a close sprint Valentin narrowly missed the win and Andy began his domination of the weekend. 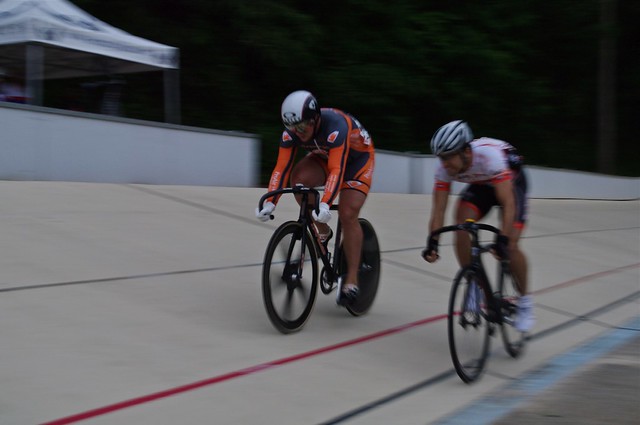 Junior rider Brody Hartley below established his ability to spin and win early on.

Expect big things from this guy.  Blasting off the front and securing solo victories comes natural for him. 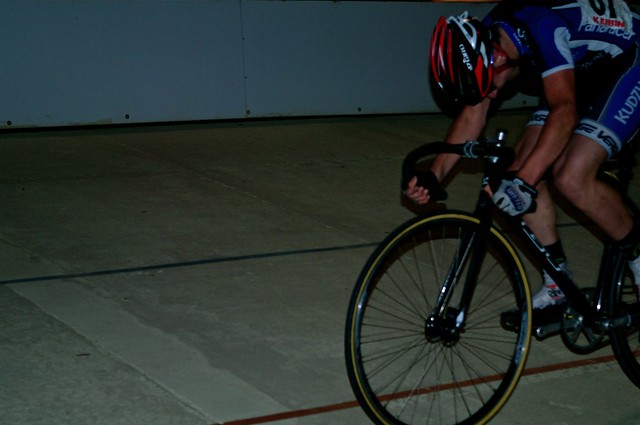 Jon Fraley below is poised strategically in a match sprint against Andy Lakatosh. 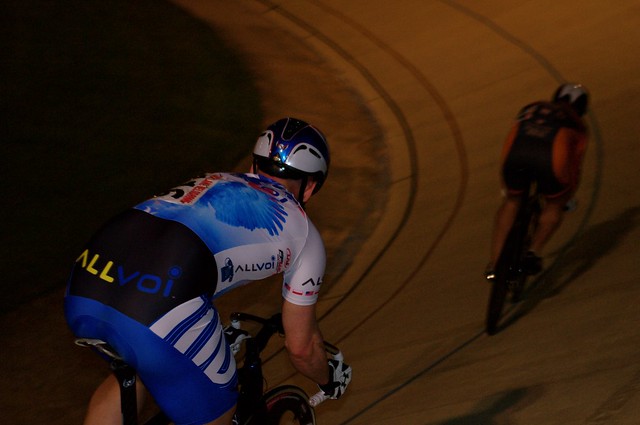 And as the sun went down the track really lit up with the sprint tournament coming to epic final rounds. 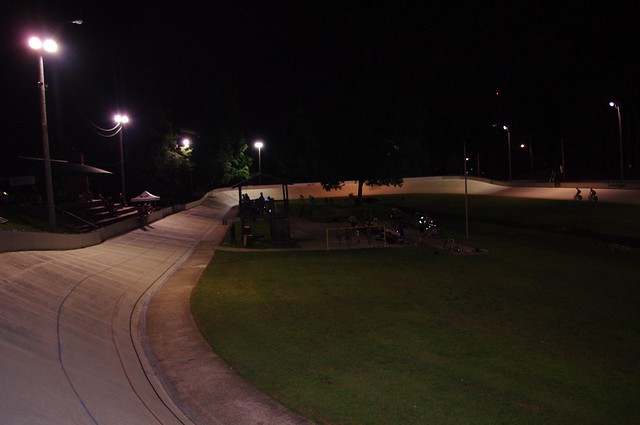 Matt Baranoski ready to strike on Alexander Gil.   In a blisteringly fast match, Matt won but fought for it. 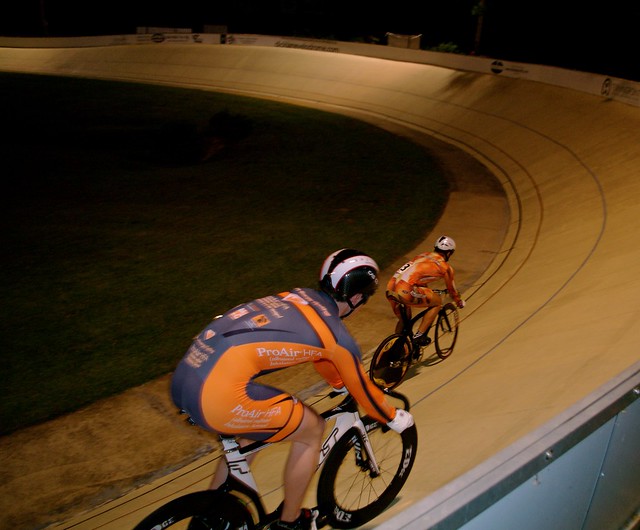 You can see he was feeling the burn as Alexander did not give up without a fierce fight. 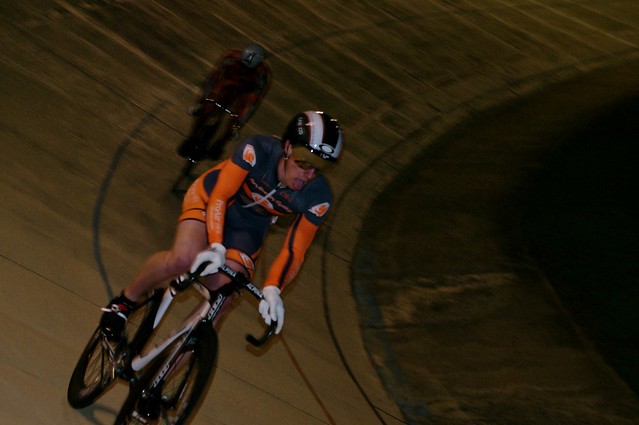 Next up was Jonny Serious and Alexander.  Jon narrowly missed the mark against the Miami native. 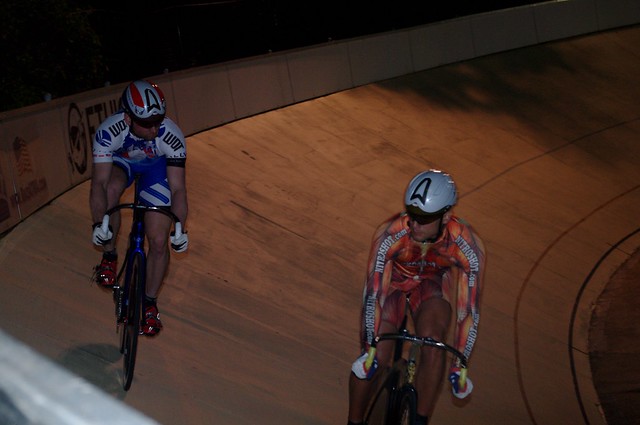 The final brought some Olympic level fireworks to East Point.

Elite Keirin Champ Matt Baranoski on left below faced off against his teammate Andy Lakatosh. 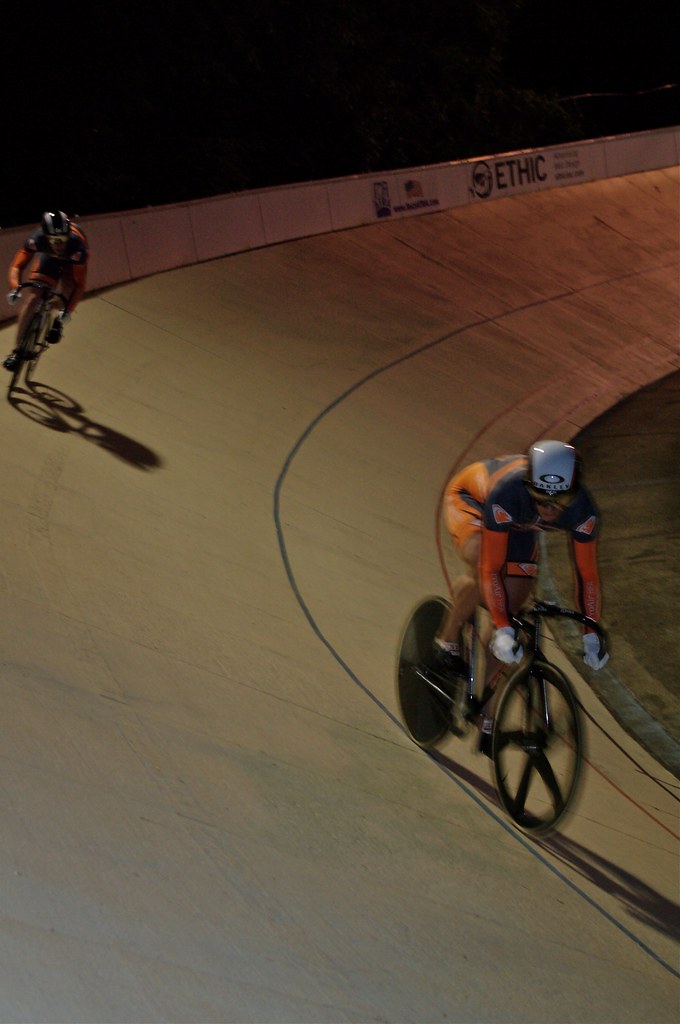 These guys know each very well and would be hard pressed to surprise  each other.

With 1st place up for grabs, Matt scooped up the Sprint podium at the line in a neck and neck battle.

I’ll be posting photos and a recap from yesterday’s Keirin soon.

More Sprint photos here and the night’s results are here. 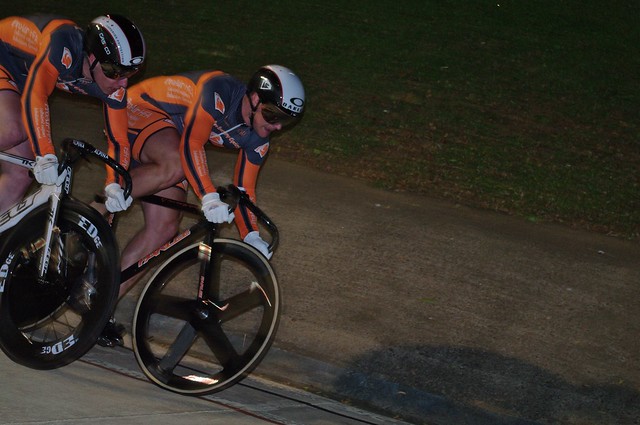