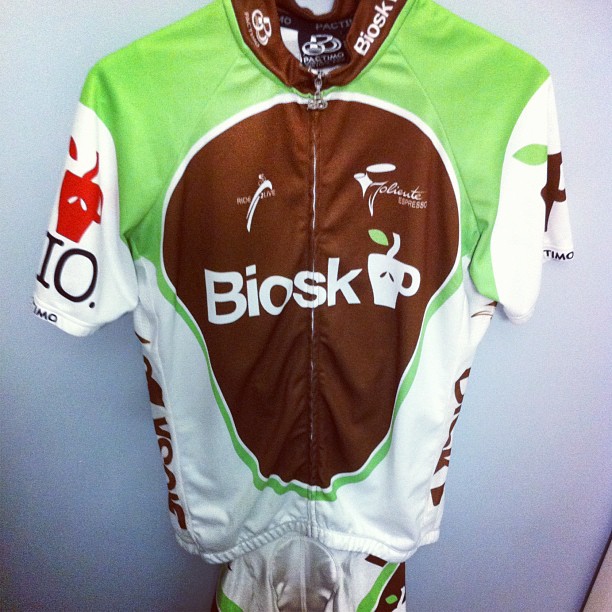 Another early morning.  Leave it to an apparel company to inspire you to wake up so early, so often.

Leave it to a kit to remind you of serenely scrumptious soups and organic treats, Biosk!

Damn i miss Freiburg. For updates from that neck of the woods be sure to follow europeantouches.cc

Meanwhile, in Florida, my Festive 500 quest continues and was scheduled to be completed today… 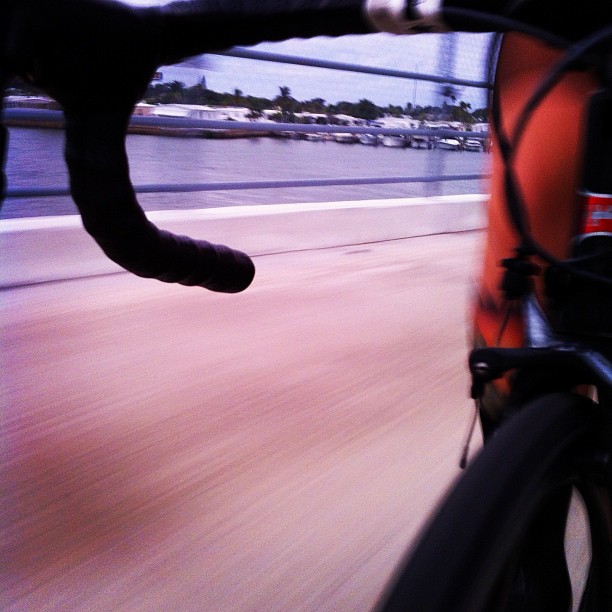 I set out earlier than necessary to rendezvous with a group ride i had caught wind of yesterday.

I want to spin my first 10 miles real slow and allowed myself nearly an hour to warm up.

Charlie in Garmin kit and John (another John) in Nalini, were happy to show me the way to the start.

In fact, I recognized Charlie from the Ride’n’Roll group yesterday.

Nice to already have familiar faces around here. 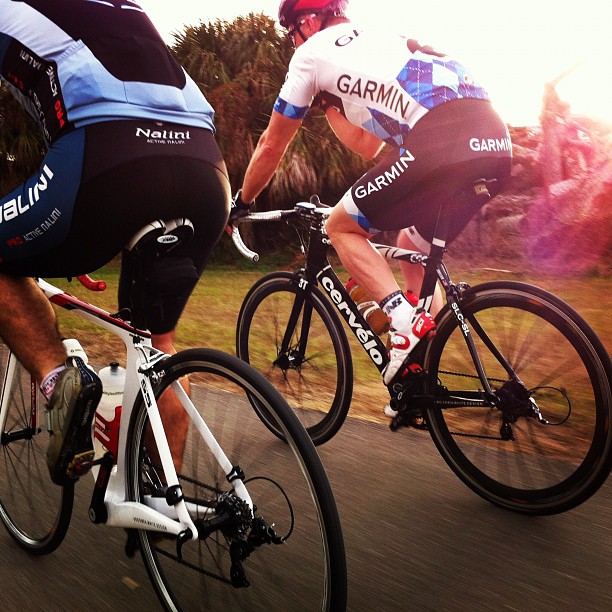 I met up with two other guys and headed out on a loop new to me.

Settling in a paceline, we sped up.

I was second wheel, expect a turn to pull on a long straight, no lights nor stop signed road.

Suddenly the guy in front of me yelled.

Slammed his brakes and swerved, I had been looking further down the road…

Immediately halfwheeled, his swerve took me out.

I saw the car fender.

Felt John pass over/beside me over the hood. That sound, the bike crash sound.  I hate it.

That moment.  The millisecond you know you are crashing and contemplate how bad it will be.

Immediately I stood up.  Cursing, I photographed the motorist’s license plate and dialed 911.

The car had not stopped at a stop sign and had begun a left turn, into our paceline.

Fucking pissed is an understatement. 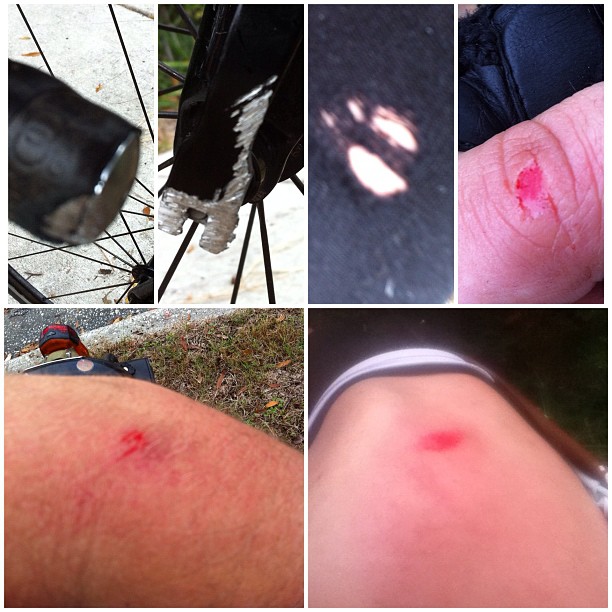 My wounds were/are minimal.  The Biosk kit will see many more rides and my Kazane is ok.

Some stuff needs to be replaced but John’s Cervelo is toast.

Cracked around the headtube behind the fork, it had less than 500 miles on it.

Bicycle acidents because of motorist negligence suck more than that.

His failure to yield should provide compensation for our damages.  But Florida is ‘no fault’?

Tomorrow I’ll call his insurance and find out. The important part is everyone was ok. 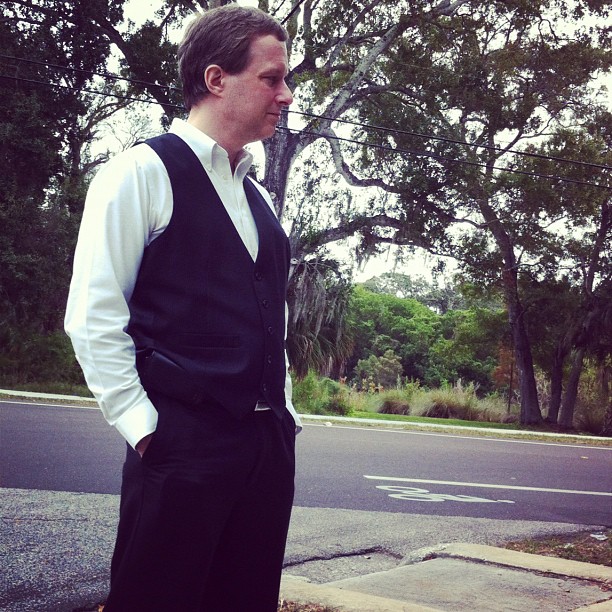 We abandoned our planned route.  Some unscathed guys continued. Charlie, John & I got some coffee.

That helped. The fact the cop on the scene was a cyclist probably helped as well.

The common experiences, bonds and nearly immediate friendships that cyclists share, that helped too. 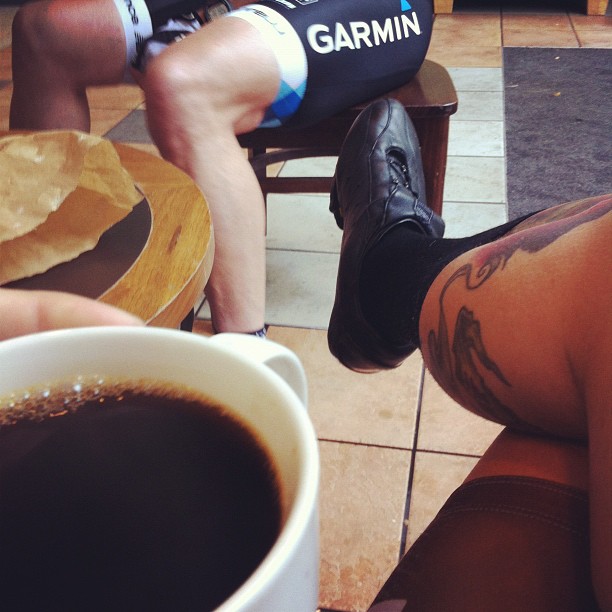 Riding home in the rain? That did not help and my wounds stung.

Soaked and realizing I would not wrap up my 500k, I made my way back to Largo. 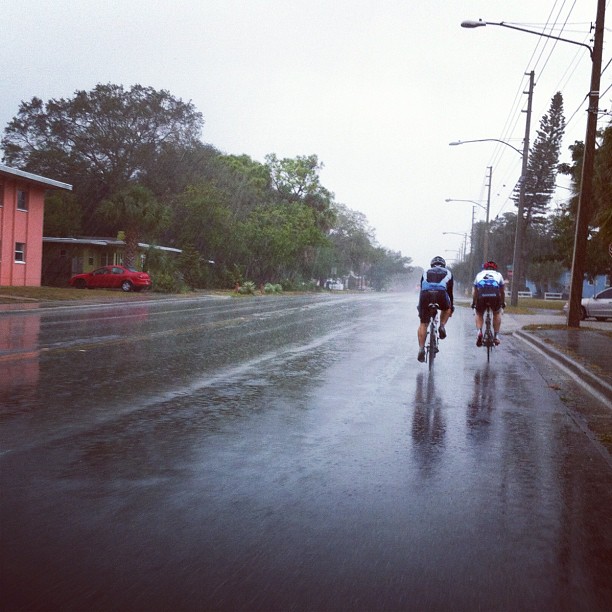 In a final allegory of feeling vulnerable on the road. Not to mention slow.  ; )

I helped this little guy get across the street. It was pouring at that point.

I was relieved to get off my bike in one piece. 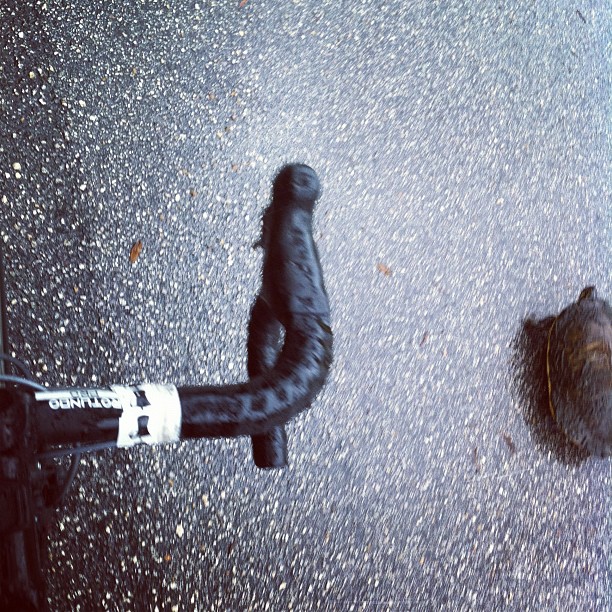 All things considered i feel sore but extremely lucky. I’ll be back out there tomorrow and after that…

Stories like this really make me remember how fortunate we were today.

Ride info below and on strava.  Yesterday’s post is here. 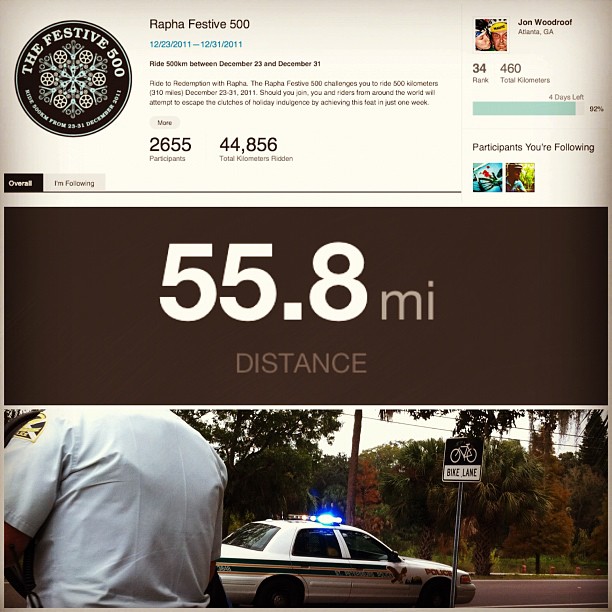