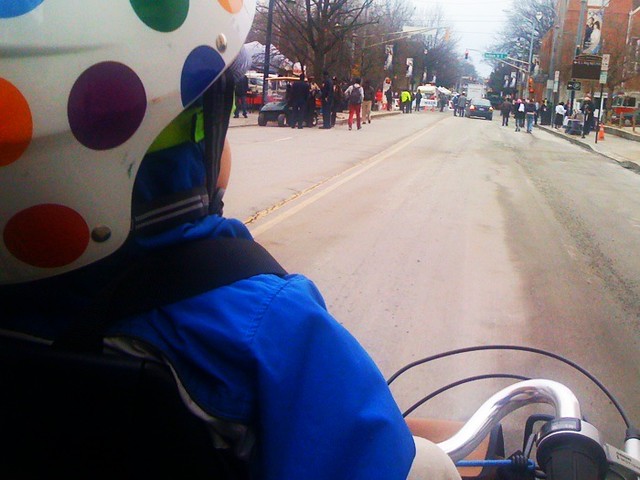 Though neither my wife nor I are employed at companies that offer the day off, our son’s school was closed.

Initially, the plan was that I’d work but the plan changed and instantly I got stoked about Otto’s 1st field trip.

We live very close to the MLK National Historic Site and not visiting on such an occasion wasn’t an option. 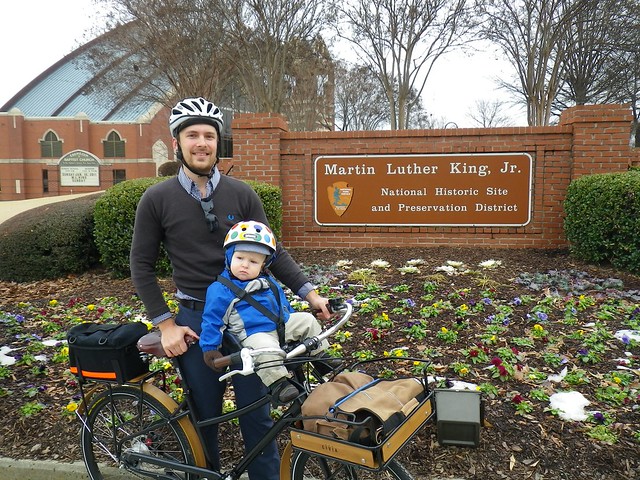 It was Otto’s first visit and certainly not his last.

Don’t let his mean mug fool you.  He was excited about this and every trip on our Civia Loring! 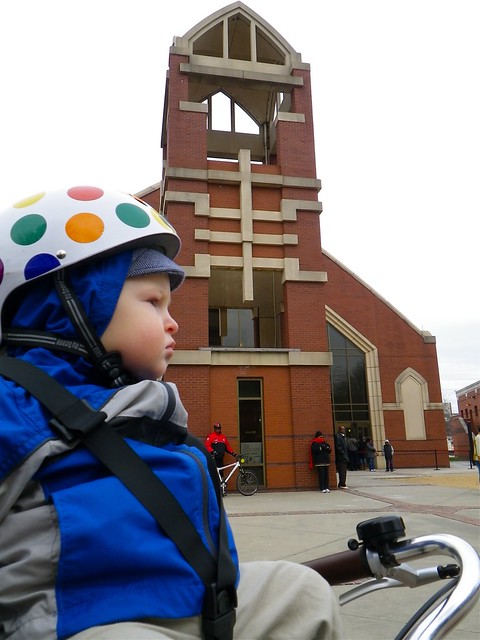 We stood and listened to Mayor Kasim Reed’s speech and took a look around as the day’s crowd grew. 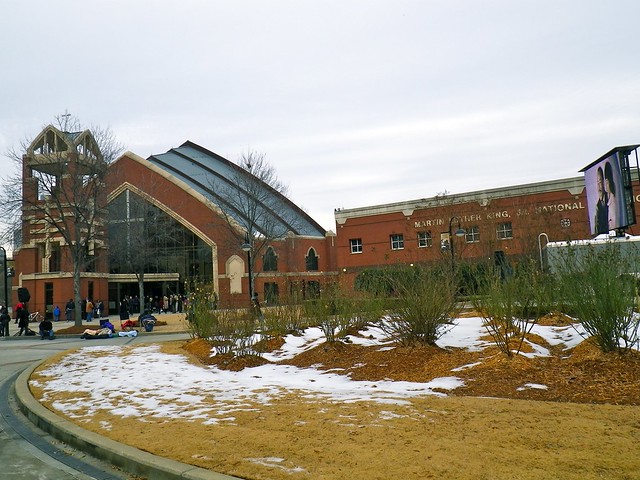 You can see the big screen above right where all the events transpiring within the church were shown.

Behind where I am standing taking this photo,  Auburn Avenue was closed and vendors were setting up. 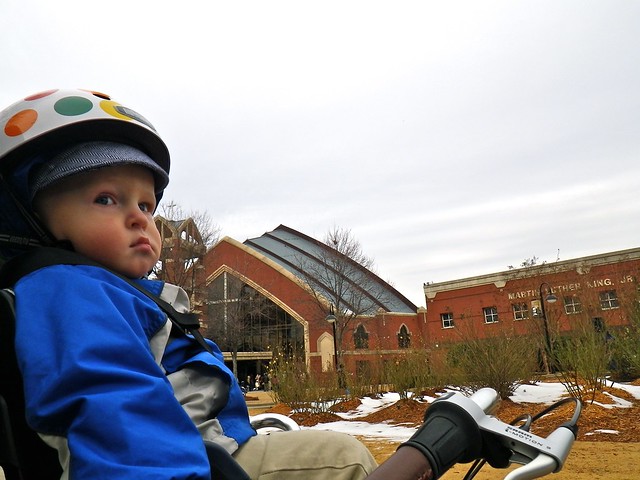 Otto caught a glimpse of bikes and we rolled over to check it out.

He has become quite adept at identifying bicycles in books, pictures and of course in streets. 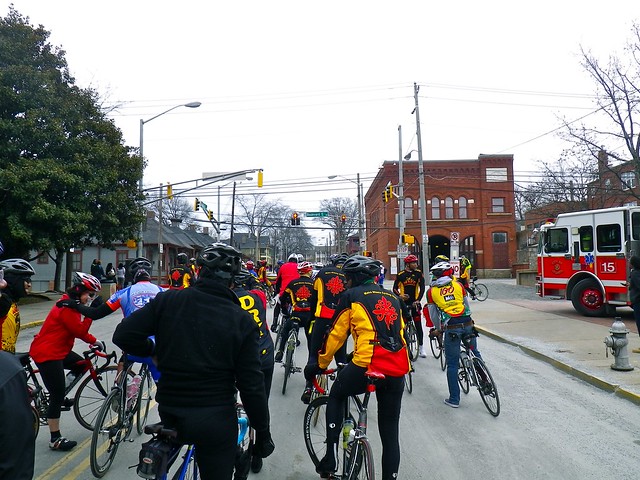 It was the Metro Atlanta Cycling Club!

I’m bummed we missed this ride, I need to step up my radar of ATL bike events.  Please email them to me!

I am certain Otto and I will participate next year.

I followed the peloton north on Boulevard and turned off at the Freedom Trail for our day’s next stop. 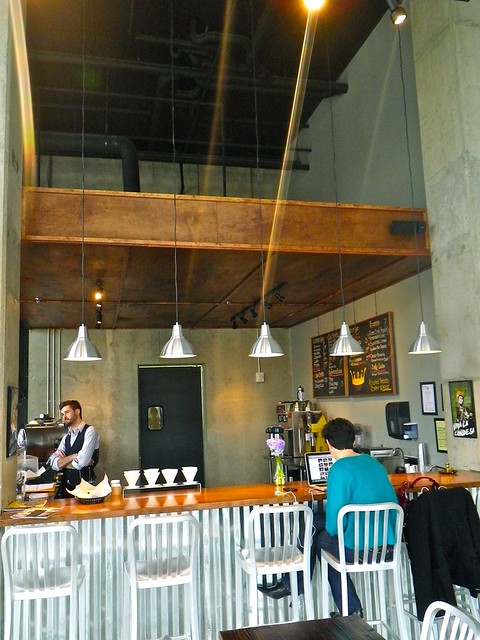 New to me, Condesa Coffee has been open a month or two.

The space looked great and had some good reading out for patrons to peruse.

I had a machiatto and Otto & I shared a slice of vegan zucchini bread.  Otto was fanatical about it. 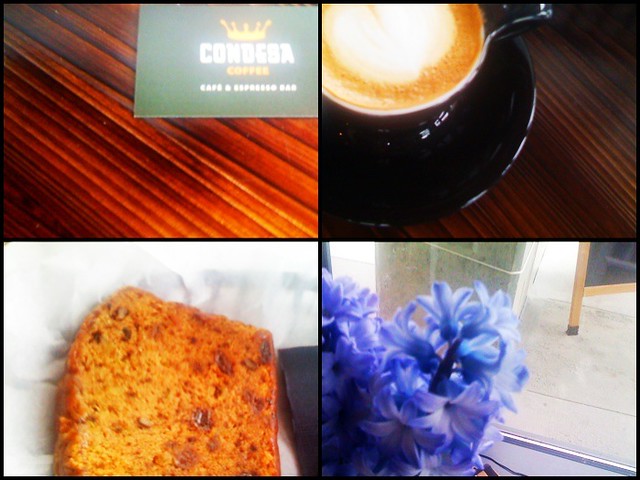 The view is off the charts and atmosphere on point. 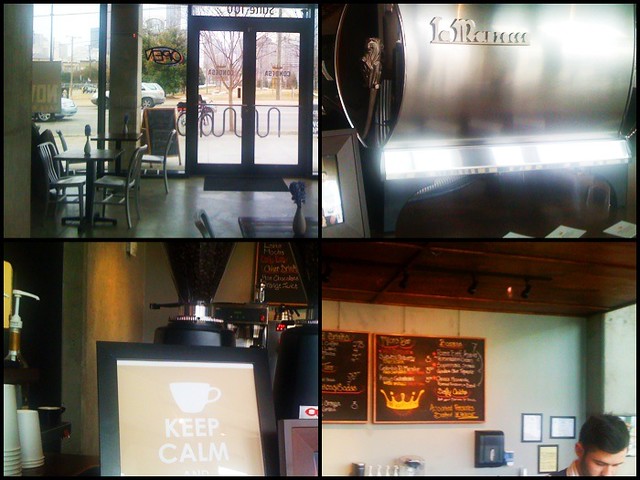 Otto and I decided to head south for another cruise through the MLK Festivites as naptime encroached. 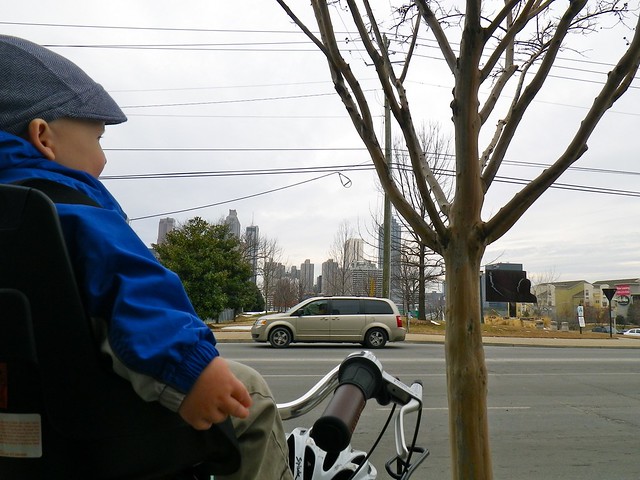 We spotted a track bike that looked familiar to me. A KHS? 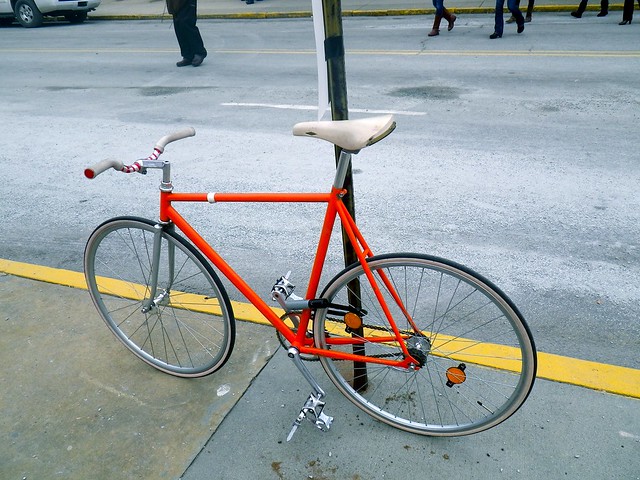 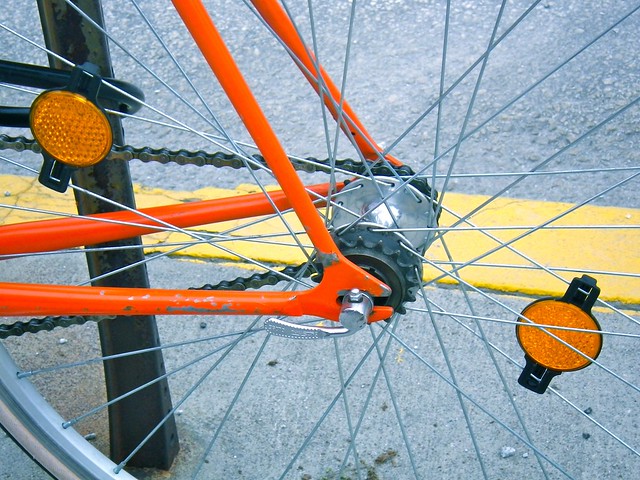 It was my buddy Joy.  The KHS Pursuit formerly belogned to a former friend of mine and looked real nice.

Joy is a cycling connoisseur like no other.  His period specific builds have always been amazing.

His Viner Pista was always one of my favorites. Good to see you Joy! 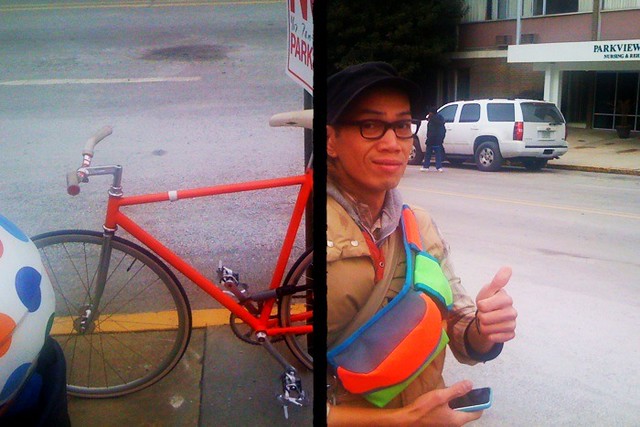 Below is the original Ebenezer Baptist Church on Auburn.

Atlanta really was the epicenter of some epic events from that era in American history.

Its hard to imagine how recently segregation existed. Or that it existed at all. Seriously.

America has come a long way and I look forward to seeing how it changes as Otto grows older. 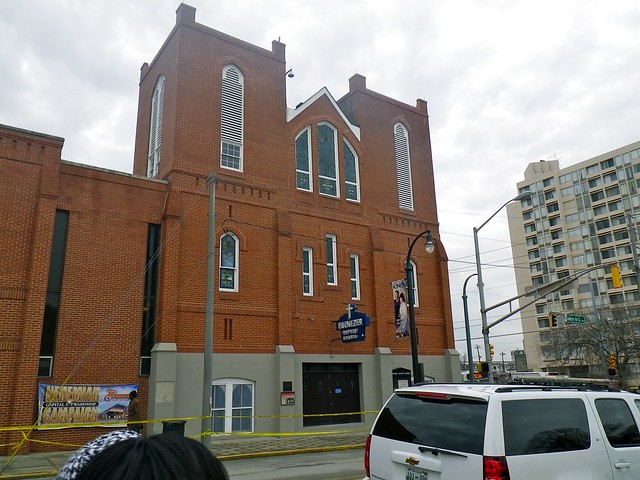 We kept cruising west on Auburn.  An unfortunately derelict district despite its deep roots.

Not to mention it was no mistake the 75/85 Downtown Connector was paved straight through it.

Though some lots are coming to life it appears, as the community garden below reveals. 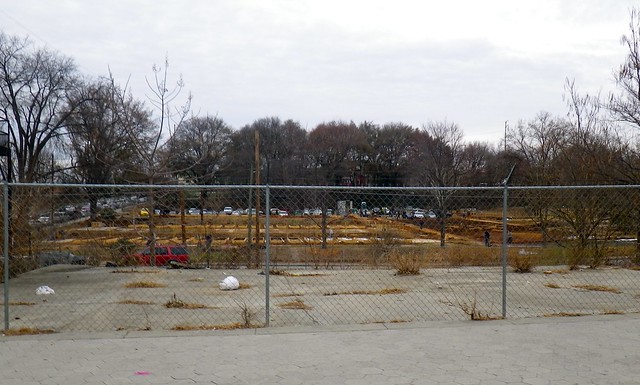 Signs of life.  Indeed, its rare that many people are found on Atlanta’s streets on any given day.

Events like this are great.  Its nice to see this many people walking, riding and getting around sans cars. 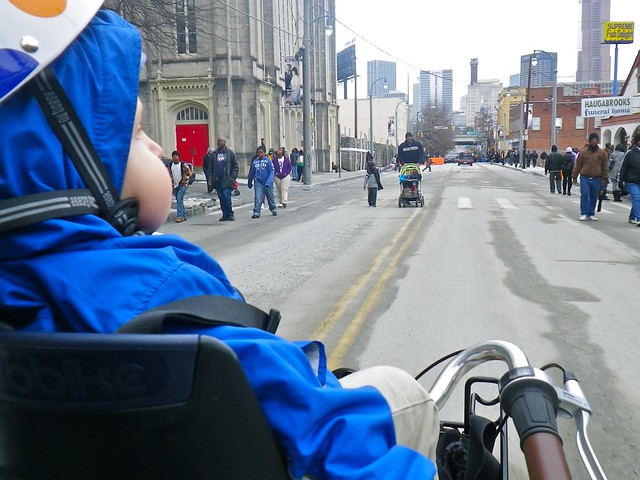 The Sweet Auburn neighborhood, once the center of African-American commerce in the city, suffered when the Downtown Connector was built, separating the district from the rest of downtown.

In the early 1950s as a six-lane thoroughfare The Downtown Connector was introduced.

According to Wikipedia, it carries more than 272,000 vehicles per day at its busiest point

while no portion of the Downtown Connector carries fewer than 236,000 vehicles per day it is

one of the 10 most congested stretches of interstate in the U.S.

And speaking of horrible. 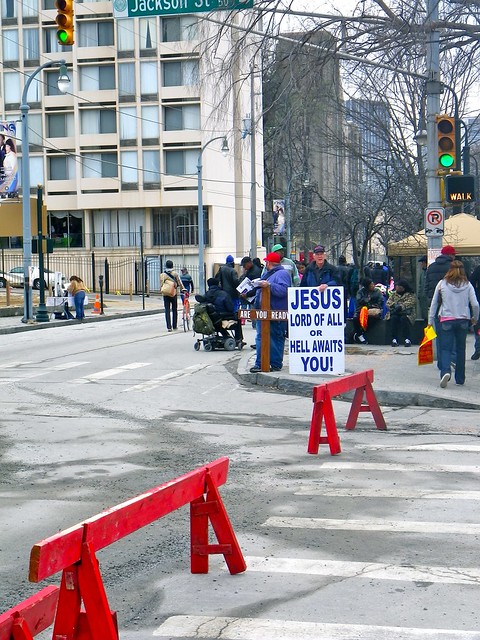 Who do these these guys think they’re helping?  Today’s supposed to be about service. Not scary signs. 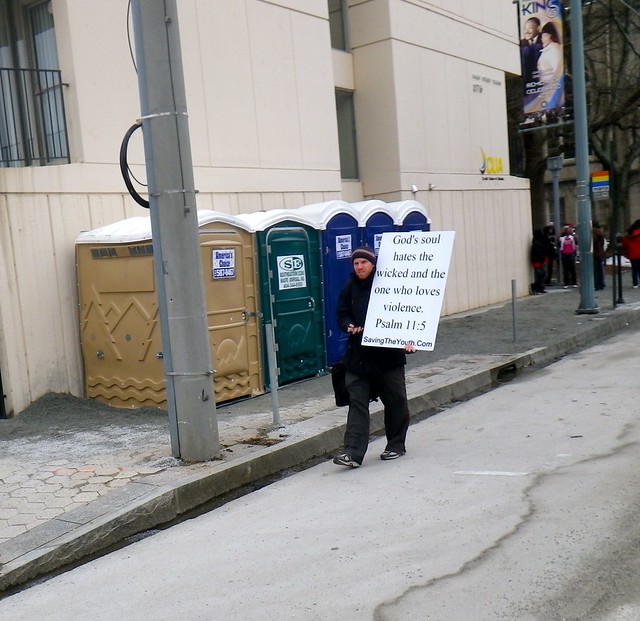 Though this is the blog’s 1st Otto Adventure installment, its hardly his first adventure.

Otto & I have conquered the streets of Chicago, visited Starlight Bikes in Roanoke & Bilenky in Philly!

Stay tuned for our next Adventure in San Francisco happening later this month.

On our way home as the clock struck nap-thirty Otto zonked out and he made it into the crib still asleep.

Below on our route back to the house is the King Memorial Marta Station. More photos can be found here. 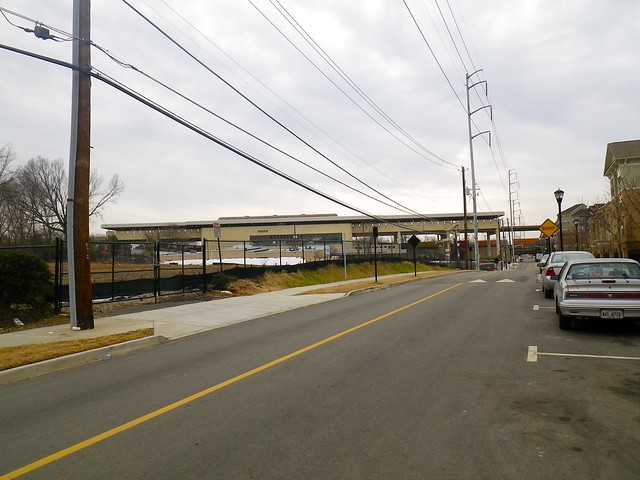